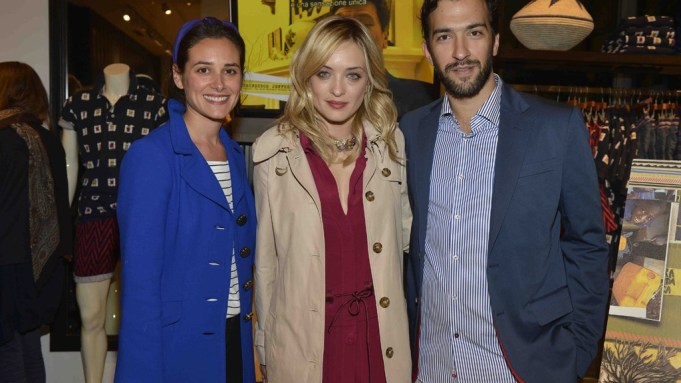 Neither pouring rain nor chilly temperatures stopped the artistic frenzy of Milan design week on Thursday.

Tommy Hilfiger hosted a boutique event to launch “The Promise Collection,” a line manufactured in Africa with proceeds benefiting Millennium Promise, an international non-profit organization that aims to halve poverty in Africa by 2015.

In addition to fashion and accessories collections, the company unveiled an artistic project in partnership with Ambra Medda, who selected Mexican designer Francisco Torres to create an installation in the Milan store’s courtyard.

“This is my first collaboration for a charity project, because for the first time I had the feeling I was able to do something concrete, even small,” said Medda, who recently moved from Miami to New York to open a new artistic consulting firm. “I’ll announce my next big project very soon,” she said.

Torres worked with Mexican artisans to create a colorful jug about 17 feet high, with images shot in Uganda by photographer Tom Munro inside. The exhibition included pictures of actress Katie Holmes, who took a trip to Africa in January as ambassador of the charity project.

“I opened a contemporary art gallery in Mexico City one year ago,” said Torres, back at Milan design week after a two-year hiatus. “I’m used to working a lot with Mexican artisans in different regions of the country and I think it’s always a great experience because it creates not only a professional but also human exchange.”

At Milan’s historic Palazzo Durini, guests toasted eclectic fashion and furniture designer Vincent Darré, a longtime friend of artist Giulio Durini, at a cocktail in collaboration with Casa Vogue. “It’s a tribute to futurism and cubism,” explained Darré, who was showcasing three colorful carpets and several jazzy, one-of-a-kind asymmetrical tables with false perspectives, as well as framed sections of wallpaper, which he created by scanning old collages sent to friends. “The colors aren’t Cubist, but inspired by Yves Saint Laurent in the Eighties,” Darré added, referring to the carpets. “Everything reminds us of something from the past, nothing is truly modern.”

Creativity was the key word at Stefanel’s cocktail party in the suggestive 18th century cloisters of the National Museum of Science and Technology, where the second volume of “May I Introduce You?” the talent guide edited by Ginevra Elkann, made its debut.

Among the 25 personalities included in this year’s edition, Elkann profiled fashion designers Delfina Delettrez Fendi and Olympia Le Tan, along with Los Angeles-based artist Konstantin Kakanias, who has also created illustrations for publications including The New York Times, Vanity Fair and Vogue.

Italian outerwear company Duvetica celebrated architect Tadao Ando with an exhibition at its boutique on Via Santo Spirito.

“The Salone del Mobile is about what is necessary for living, so I’m very interested in it,” said Ando, who added he is developing a project in Bologna.

This week, the architect also presented “Wave with soul,” a glass figure created for Venini.