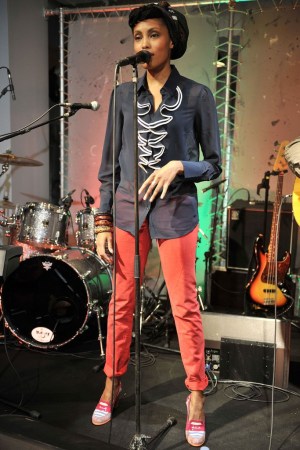 BAND AID: With rousing live performances from Manu Dibango and Imany, the fashion crowd thronged to Tommy Hilfiger’s Avenue des Champs-Elysées flagship on Thursday night for the Paris launch of “The Promise Collection,” a line manufactured in Africa with proceeds benefiting Millennium Promise, an international non-profit organization that aims to halve poverty in Africa by 2015.

“She’s amazing, she has soul in her voice,” said the night’s host, Yelena Noah, as she took in Imany’s concert in the store’s sprawling basement. But she was quick to remind her entourage that the night was not just about entertainment. “It’s amazing. I mean it’s always nice to have a cocktail and to drink Champagne, but it’s important to remember what this is for,” she said. “I really like what they’re doing. It’s not charity just to give, it’s charity to create sustainable development [in Africa], and Tommy Hilfiger, which is a huge, huge company, is giving 100 percent of the proceeds from the collection, which is quite rare. It’s quite beautiful.”

Noah, who is a jewelry designer, revealed she has a charitable project in the pipeline herself. She is developing a jewelry collection with women from a community in Suriname. “It will be based on their cultural identity, very ethnic looking. But it’s still in the pipeline,” explained Noah, adding that she hopes to launch it in the U.S., where she is based, this fall.

Backstage after her concert, Imany, who used to be a model, said she is busy promoting her debut album, “The Shape of a Broken Heart.”

“It’s the form of the African continent. When you look closer, that’s the shape of a broken heart to me,” said Imany.