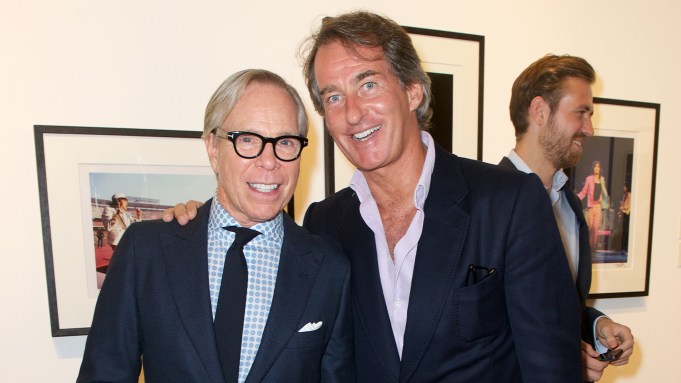 HIPPIE HOUR: “When I was a teenager, I wanted to look like a rock star and wear hippie clothing. That’s what led me to fashion,” said Tommy Hilfiger, whose passion for rock’n’roll has never abated.

Drawing inspiration from the eponymous book, which the designer published 15 years ago, the project’s aim is to spotlight the most famous crooners and bands of the Seventies and Eighties, and the impact they’ve had on fashion. “Jimi Hindrix, Elvis, The Beatles – there’s not one photograph here that hasn’t had influence over fashion,” Hilfiger said.

After choosing the “best of the best” from his book, Hilfiger alongside Deitch – a friend and long-time collaborator – approached photographers, includingKevin Mazur, Ralph Morse and Terry O’Neill for the images, many of which are now on display at Sotheby’s for the first time.

In addition, the street artist Shepard Fairey was commissioned to create six paintings of the most iconic rock stars for the event. “This right here is my favorite painting,” said the designer, pointing to Fairey’s abstract interpretation of Elvis Presley.

An image of David Bowie by Mick Rock, portraying him when he first started experimenting with androgyny, was another standout, as well as a portrait of Jimmy Hendrix by Gered Mankowitz.

Dee Hilfiger popped to the British capital to support her husband’s project, before returning to New York to host an event with Kerry Washington at Saks Fifth Avenue. Tommy Hilfiger will be returning to London in a few weeks to co-host the opening night of Frieze Art Fair with Sotheby’s.