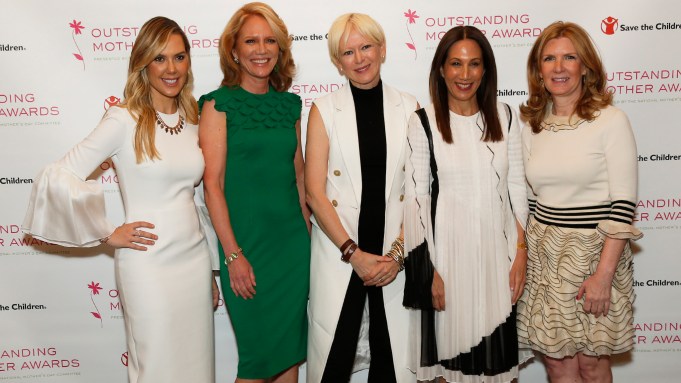 The four honorees of the 2017 Outstanding Mother Awards Monday have at least one thing in common: When it comes to juggling demanding jobs in the retail and beauty industry with motherhood, family comes first.

Joanna Coles, chief content officer of Hearst Magazines and a 2015 outstanding mother honoree, was the mistress of ceremonies at the event, which was held at The Pierre hotel. Attended by 500 people, the luncheon raised nearly $600,000 with proceeds benefiting Save the Children’s U.S. programs.

Leonard Lauder, chairman emeritus of Lauder, presented the award to Hudis, and explained what’s so impressive about her is that she refers to her stepsons, Sam and Isaac, as “her children.” This is the first time that the award has gone to a stepmom.

Joining this all male household, she said she went from “Lauder to Lego” and “Night Repair to Nintendo.” Living in the same building with her husband’s ex-wife and the mother of Sam and Isaac, every event was celebrated and every decision was made by all the parents. “The five of us paved a new road.…We were a ‘modern family,’ long before the TV show ever aired,” she said.

Oldham, a single mother, joked that she’s had some rough patches over the years raising her 20-year-old son as a single mom. She recalled lighting a candle and Luke’s pajamas at the same time. “The mother of the year is not the mother of every year,” she said. “Even the best moms have messed up on some occasions.”

She thanked Saks Fifth Avenue for embracing her single motherhood. “Being a single mom is tough, but I have some awesome friends and coworkers,” said Oldham. “Ninety percent of being a good mom is showing up,” she said.

Schmeling said when it comes to balancing her career and family, it’s not a balancing act at all. “Family comes first no matter what,” she said. When she asked to describe herself, adjectives such as serious, hardworking and dramatic came to mind. But when her boys were asked the same question, they texted, “caring, supportive, passionate and inspirational.” “Tears sprang to my eyes,” said Schmeling.

Scott wears many hats as the designer and ceo of a $225 million jewelry company. She’s also a philanthropist, and last year gifted 75,000 pieces of jewelry and gave back $3.5 million. But the most important job she has is being a mom of three boys. Now as the mother of a 15-year-old, sometimes she’s greeted with a grumpy bear and other times a big hug. She also has a 13-year-old son, as well as a three-year-old son from her second marriage.

Her company employs 2,000 people and 98 percent are women. She’s got a pumping room at the company and a refrigerator for mother’s milk. There’s also a manicure room. Tearing up, she said there’s one woman in the room who deserves this award more than her, and that’s her mother, Janet. “She is what strength looks like,” said Scott. “You showed me unconditional love and that anything is possible, no matter where you come from.”

Scott said she was asked earlier that day how she balances motherhood with a demanding job and replied, “I don’t know. Some days I feel that I am a rock star, I’ve got his figured out. And other days I’m lying in bed with tears streaming down my face and feeling like a complete failure.…This is the hardest job in the world, but boy how lucky we are to be moms.”