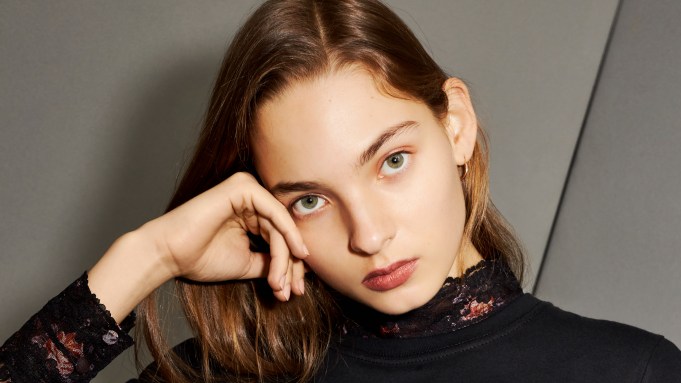 TOPSHOP TAKES A TRIP: Topshop has teamed with Netflix on a zeitgeist-y deal that will see stores across the U.K. channel the spirit of the hit, Eighties-inspired TV series “Stranger Things,” which stars Winona Ryder and teen actors Millie Bobby Brown, Caleb McLaughlin and Gaten Matarazzo.

In the run-up to Halloween, Topshop and Topman will be working with Netflix to promote “Stranger Things 2” with in-store cinema-style screenings at the Oxford Circus flagship in London, themed setting from the TV series and an accompanying capsule collection that will go on sale at Topshop stores in the U.K. on Oct. 20.

Topshop has described the Netflix collaboration as a “360 relationship” that will fuse fashion, culture and entertainment ahead of the season two release on Oct. 27.

Sheena Sauvaire, global marketing and communications director at Topshop, said in an interview that the worlds of entertainment, culture, fashion and tech are all colliding and that the Netflix tie-up made sense for the retailer’s young customer. “Plus, we’ve always admired how Netflix has disrupted entertainment,” she said.

Sauvaire added that the in-store takeover plays to the Topshop customer’s obsession with retro styling right now, and in particular the look of the “Stranger Things” characters who all live in Hawkins, Ind., in the early Eighties.

The partnership will also give Topshop customers and Netflix watchers the chance to watch two episodes of the new series the night before launch, in a “Stranger Things” style cinema at the Topshop flagship.

Customers will have the chance to watch the new series in a back-to-back binge session hosted by the actress Shannon Purser, who played the nerdy, sensible — and ill-fated — character Barb in the first series.

In-store sets will include Hawkin’s Lab, the arcade, and Will’s Castle Byers den. Topshop has also re-created the “Upside Down,” the creepy gray underworld populated by snakes, slime — and dead bodies.

Topshop said activity will take place in select flagships across the U.K. The brand has also created a 28-piece capsule clothing and accessories collection. The retro, Eighties-style collection will drop on Oct. 20 online and in select Topshop stores.