Customers can experience the retailer's London show via special headsets at its Oxford Circus flagship. 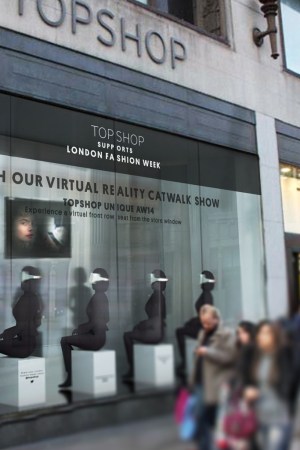 REALITY SHOW: Giving customers a digital window onto runway shows has a new, high-tech twist: At the upcoming Topshop Unique show, the retailer has teamed with Inition, a London-based 3D agency, to live stream a virtual reality experience of the show into Topshop’s Oxford Circus flagship.

The show, which takes place at Tate Modern’s Turbine Hall on Feb. 16, will be streamed via specially-commissioned headsets installed in the windows of Topshop’s Oxford Circus store. Participants watching the show with the head-sets are promised a 360-degree experience that will blend live action from the runway, backstage and VIP arrivals, along with views of the set design and animated features.

Following the initial live-stream, customers will be able to see replays of the experience through Feb. 18.

Meanwhile, for those who happen to be visiting the Tate on Sunday, Topshop plans to offer a glimpse into the inner workings of the runway. Museum goers will be able to observe the set up, while the show itself will be visible from viewing platforms that overlook the Turbine Hall.

“This season’s live stream in virtual reality…takes the idea of a traditional fashion show to a new dimension,” said Sir Philip Green, owner of the Arcadia Group, Topshop’s parent company.

Topshop will also live-stream its show via its Web site, and a selection of the looks will be available to buy straight after the show for delivery three months ahead of when they would hit stores.

The makeup used in the show will also be available to buy online immediately afterwards, as will the soundtrack, via iTunes. Social media will continue to be front and center, with live Instagram, Twitter and Vine feeds on the Topshop Unique show landing page, along with 360 degree images of the show, which will be posted as the action unfolds.

Sheena Sauvaire, global head of marketing at Topshop, has called the cavernous Turbine hall, which is approximately 500 feet long and 115 feet high, a “strong” backdrop: “The natural light is a key feature of the Turbine Hall, so again we will work in harmony with it.”

Topshop and the brands it supports had shown at Tate Modern before — in an underground space known as The Tanks.