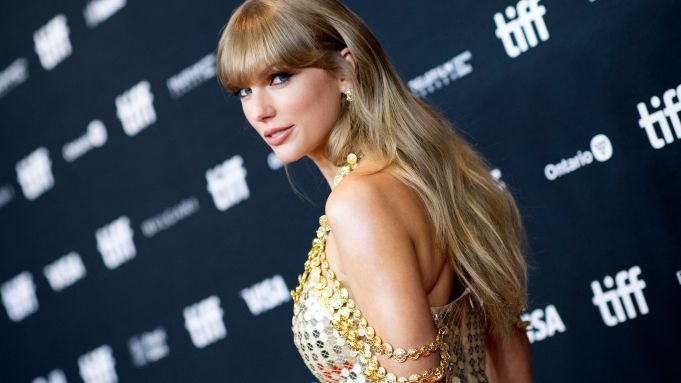 The Toronto International Film Festival has delivered many major fashion moments over the last week.

The 47th edition of the annual film festival has brought together many of today’s biggest celebrities to debut the season’s most-anticipated films. One such film was the upcoming drama “My Policeman,” starring Harry Styles and Emma Corrin. Both stars, who are styled by Harry Lambert, had standout fashion moments on the red carpet with looks from Gucci and Miu Miu, respectively.

Taylor Swift also made an impression at the Toronto Film Festival, attending a special screening of her short film “All Too Well,” wearing a custom, gold sequined gown made by Louis Vuitton.

Here, WWD rounds up some of the standout fashion moments from the Toronto International Film Festival. Scroll on for more.

Union helped kick off the Toronto International Film Festival on opening night for the premiere of her film “The Inspection,” wearing an eye-catching look from Vivienne Westwood. Union’s look was a black satin dress with a corset-like top and a thigh-high slit. She paired the look with an oversize necklace also from Vivienne Westwood and other jewelry from brands like Melinda Maria and Graziela Gems.

Corrin joined Styles at the premiere of their film “My Policeman” in their own standout fashion look. Corrin walked the red carpet wearing a black Miu Miu high-cut bodysuit accented with a black train. They accessorized the look with jewelry from Cartier, wearing the Panthère de Cartier High Jewelry earrings featuring emeralds and a matching emerald ring.

Swift attended a special screening of her short film “All Too Well,” during the film festival wearing a custom gown by Louis Vuitton. The Grammy-winning musician’s gown featured gold sequined embroidery and a gold chain embellishment.

Monáe joined the cast of “Glass Onion: A Knives Out Mystery” during the film festival wearing an avant garde dress from Iris van Herpen’s fall 2022 couture collection. Monáe’s gown featured a three-dimensional bodice and a cascading train. The musician paired the look with Pamela Love earrings.

Foy attended the premiere of her new film “Women Talking” in a custom look from Prada. Foy’s look was a black satin strapless dress embellished with applied stones.

Buckley also attended the premiere of “Women Talking” in her own standout look. The actress wore a light blue, prairie-inspired dress from Erdem’s spring 2019 collection.