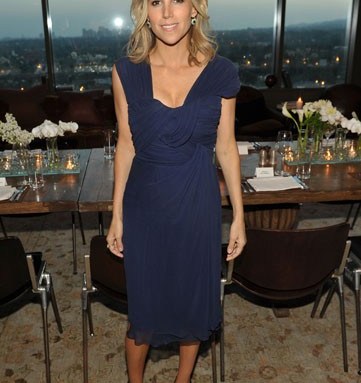 Other guests included Michelle Monaghan, who recently returned from a world press tour for the action movie “Source Code”; Hailee Steinfeld, who’s following up her Oscar-nominated turn in “True Grit” with a remake of “Romeo and Juliet,” and Teresa Palmer, who, when not in negotiations to play Nicholas Hoult’s love interest in the zombie flick “Warm Bodies,” is producing her first movie, “Track Town,” which she dubbed “a hybrid between ‘Thelma & Louise’ and ‘True Romance.’

STATUS QUO: During a tumultuous Paris Fashion Week marked by John Galliano’s flameout and Christophe Decarnin’s no-show at Balmain, there was also widespread speculation that Chloé and its designer, Hannah MacGibbon, would be parting ways after her runway bow. Not so. According to market sources, MacGibbon, creative director at Chloé since 2008, recently extended her contract with the French fashion and accessories goods house for another season. After that is anyone’s guess. Reached on Friday, Chloé’s chief executive officer Geoffroy de la Bourdonnaye said, “Hannah is still with us, that’s all I can say.”

PATRON MARC: Peek & Cloppenburg’s Designer for Tomorrow competition has just gotten a major design boost — and its first patron: Marc Jacobs. He is not only expected to hand out the award to the winning young designer July 6 during Mercedes-Benz Fashion Week Berlin. Jacobs will also be doing the first edit of the DFT applications before the jury of journalists and retailers are asked to select five semi-finalists for the upcoming award show.

This is the fourth round for Peek & Cloppenburg’s Designer for Tomorrow contest, past winners of which were Julia Knüpfer, Joel S. Horwitz, Sam Frenzel and Parsival Cserer. The prize comprises about 150,000 euros, or about $200,000, worth of start-up help. The German specialty store chain finances the winner’s first collection, selected pieces of which are carried in the P&C stores, oversees communication and public relations, and organizes a show for the winner during the subsequent MBFWB. Given Jacobs’ involvement, there’s now also talk of a trip to New York plus an atelier visit for the winner. And who knows? Maybe more.

HELP WANTED: Olivier Theyskens and Colette are teaming in aid of earthquake- and tsunami-ravaged Japan. The Belgian designer has created four limited edition styles under the Theykens’ Theory label that are on sale at the trendy Paris boutique and on its Web site, with 100 percent of proceeds going to Red Cross-led relief efforts on the island nation. Items include a printed cotton tank top for 90 euros, or $130 at current exchange, and a silk-blend tank dress for 340 euros, or $492.

ROAD SHOW: Having already showed his original short film series for Magnum Ice Cream in Europe, Karl Lagerfeld will touch down in New York Thursday for a premiere. Rachel Bilson, who appears in the flick, will be at his side on the red carpet for the festivities at the IAC Building. The duo joined forces for Magnum’s Stateside debut. Ice cream is usually a tough sell with the fashion crowd, but if anyone can get them to splurge, it’s Karl.

TALKING TIME: As part of last week’s Madison Avenue Watch Week celebrations, Vacheron Constantin hosted a series of morning talks to dish all things horological. The Geneva-based firm, which is opening its first Manhattan flagship in September, covered the art of collecting — in a discussion between Andrew Jacobs, a senior investment professional at Metropolitan Real Estate Equity Management, and Jack Forster, editor in chief of Revolution magazine, who detailed their personal archives — as well as the auction angle in another session with John Reardon, senior vice president of watches at Sotheby’s, and Katharine Thomas, a specialist in the department. The two clued guests in on a range of topics, from the Seventies Quartz Crisis (aka the Quartz Revolution) to what’s hot on watch circuit now: enameled Turkish and Chinese Market Watches, which were made by Swiss manufacturers sent to Turkey and China in the 18th century.

The big hit of the series, however? Le Bernardin chef Eric Ripert, who has his own watch collection, including four from Vacheron Constantin and an early Cartier from his mom. But it wasn’t all watch talk. Ripert revealed he got kicked out of school at age 15 (“the principal said [to my mother], ‘Your son is such a bad student, it’s the end of the road for him’”), was an explosions specialist during his brief time in the army and was beaten up while training as a chef in France. “The French system was, we’re going to humiliate you to the point of breaking you and then we’re going to rebuild you,” he recalled. “If you made a mistake you were beaten. I remember having blue shoulders on both sides, not to mention the butt.”

LIQUID LUNCH: Belvedere recruited Zac Posen to host the launch of its new Bloody Mary flavored vodka, with a brunch at Le Caprice. On hand were Leigh Lezark, Pat and Ann Cleveland, Marjorie Gubelmann, Zani Gugelmann, Kate Lanphear and Peter Davis, among others. Posen created a special brunch menu for the restaurant that will be served through June 26. The designer hosted a similar event for Belvedere in the London branch of Le Caprice earlier in the month.

STREET SCENE: Levi’s is on a mission to create cultural experiences for customers with a design collaboration of limited edition denim jackets and a series of free film workshops at Los Angeles’ Museum of Contemporary Art. Coinciding with the “Art in the Streets” graffiti exhibition that opened Sunday, the workshop offers guests opportunities to create stop-motion animation that they can instantly share to the Web, check out film equipment for free, use editing docks and contribute to a hand-painted film strip that will be screened during a summer concert. Other street-centered events such as movie screenings with food trucks, workshops with filmmakers like Spike Jonze and skate events are also set to take place through the four-month run. In its third iteration, following stints in San Francisco and New York, Levi’s art series is tackling film for the first time. Consumers can take home a piece of the exhibit with $250 limited edition denim jackets decorated by 11 artists from the show, including Lady Pink, Shepard Fairey, André and Chaz Bojorquez.