Among the guests were Mert Alas and Marcus Piggott, Nicholas Kirkwood and Peter Pilotto. 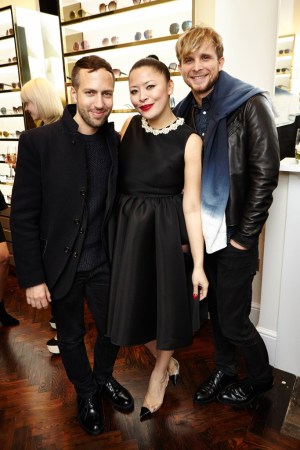 EYE ON LONDON: Husband and wife team Tracy Sedino and Simon Jablon — founders of the Linda Farrow eyewear label — gathered their designer chums at Scott’s on Mount Street last week for a dinner to mark the opening of their first London store on the street. Among the guests were Mert Alas and Marcus Piggott, Nicholas Kirkwood, designers Peter Pilotto and Christopher De Vos of the Peter Pilotto label, Marjan Pejoski and Sasha Bezovski of London’s KTZ label and models Zuzanna Bijoch and Tati Cotilar. Sedino, who was clad in a black Simone Rocha dress laced with pearls at the neck, said her outfit had been a last-minute decision. “I had nothing to wear this morning so I ordered five dresses from Net-a-Porter and this was one of them. That ease of service is a bit dangerous,” she admitted, noting that she has every intention of returning the unworn looks.
Bijoch, who’s appeared in a number of Tom Ford campaigns, dished on her ambitions outside the fashion world. “I want to do NYU’s MBA program. I love the creativity and the process behind fashion, but I would like to be the one making the decisions,” Bijoch mused. Linda Farrow’s opening on Mount Street follows the launch of the label’s shop-in-shop at Selfridges in London last fall. The Mount Street boutique spans 250-square-feet across two floors, with design details such as parquet wood floors, gold-trimmed fittings and antique gold mirrors. There is already a stand-alone Linda Farow store in Hong Kong and the label plans to open a second Hong Kong premises and a shop in Bangkok later this year.