The inaugural event, created by The Hundreds’ Bobby Kim and Ben Shenassafar, included a collaboration between chef Ludo Lefebvre of Petit Trois and designer Mike Cherman of Chinatown Market.

“Fashion is something I’ve always loved, and it sounded like such a great opportunity to work with a designer and learn more about their process,” shared famed French chef Ludo Lefebvre of Los Angeles’ beloved Petit Trois. “I was really excited that this food festival is different from all of the others.”

Lefebvre took part in Family Style Food Fest, a one-of-a-kind event that brought together food and streetwear, at Television City Studios in Los Angeles on Sunday. While serving dishes of their choice, chefs and restaurateurs were invited to present limited-edition merchandise they had created in collaboration with streetwear designers. Those in attendance — largely groups of teenagers and families — had direct access to those pieces, which were sold for the first time on site. General admission costs $40, while a VIP ticket was $120.

“I think it’s a great idea to bring together these two, great art forms,” continued the chef. “And I think everyone should look fashionable when they eat.”

The festival, attended by more than 3,000 guests (who waited in long lines for a taste of the food and chance to buy goods), was put together by The Hundreds’ Bobby Kim and Ben Shenassafar, who founded the streetwear brand in L.A. in 2003. Like many of its contemporaries — with hubs in the city’s trendy Fairfax District — the brand is rooted in skateboarding, surfing, punk and hip-hop cultures.

“For 16 years, we have centered our brand on culture and community,” the duo shared in a mutual statement. “And we are constantly reminded that nothing brings people together like great food. As friends and patrons, we’ve been working with the world’s best restaurants and chefs…so putting together a food festival with their support just felt like the next natural step for us. With Family Style, we are marrying our two loves, streetwear and food, in a way that neither world has witnessed before…”

Lefebvre collaborated with Mike Cherman of Chinatown Market, the label that plays homage to the spirit of New York City’s Canal Street. The brand, recently sported by rapper Jay-Z, is a fusion of NYC and Southern California influence. (Cherman was living in the suburbs of New York, before moving to San Diego as a teenager.) 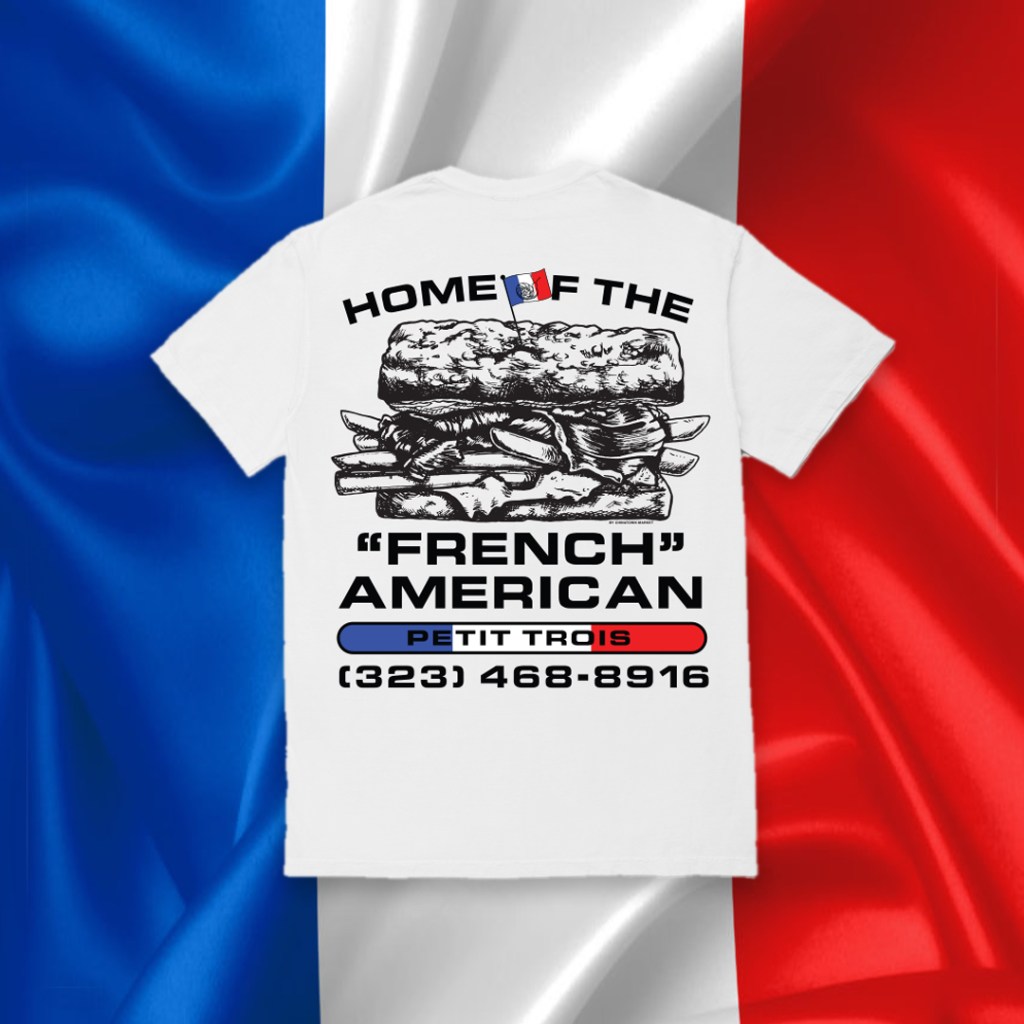 One of the items for sale on Sunday from the collaboration between Petit Trois’ Ludo Lefebvre and Chinatown Market’s Mike Cherman.  Courtesy

“I actually personally requested the opportunity to ask Petit Trois if they wanted to do a project together,” Cherman shared. “When the director of the Family Style Food Fest, Ben, called me to ask about who we would work with, I told him working with Ludo would be a dream as it’s one of my favorite meals in L.A. We were more than excited when he called back 30 minutes later to say that Petit Trois was open to meeting about the project to come together. The first meeting just had the most amazing energy and really made us feel confident we can do something special together.”

The two released a hoodie, a snapback hat, T-shirt, tote bag and items like branded ashtrays and a basketball. (Other collaborations included Jon & Vinny’s Jon Shook and Vinny Dotolo working with a young Japanese designer known as Verdy, as well as Sweet Chick’s John Seymour and rapper Nas with Kacey Lynch of Bricks & Wood.)

“We wanted to take the inspiration of Ludo’s Parisian legacy and the amazing food he creates to be fused with our classic streetwear style,” added Cherman. “This left us with an exciting collection we feel like fans of both sides will be able to appreciate.”

Lefebvre shared that he and Cherman “wanted to focus on more of a French streetwear style. We homed in on large graphics and played with the French flag a lot as well. He presented me with a couple of different directions for each item that we designed, I gave him my notes, and from there, we finalized the designs.”

The chef created $8 steak sandwiches for the day: “It is delicious and gooey and brings together both French and American flavors.”