“I like a natural tree with a few fairy lights,” said Sir Paul Smith during Tiffany’s annual holiday party. 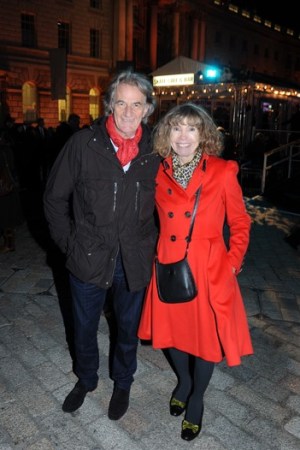 ICE, ICE BABY: “I like a natural tree with a few fairy lights,” said Sir Paul Smith during Tiffany’s annual holiday party to open the ice rink at London’s Somerset House on Monday night. “And if the grandchildren throw in any clashing colors, they’ll be tied, gagged and put in the corner,” added the cheeky designer. Julien Macdonald, meanwhile, admitted his love for an alternative holiday look: “I like to go for a camp tree, which I decorate with shells covered in glitter and fish dressed as drag queens with top hats and wigs,” he said. The two London designers joined guests including Jasmine Guinness, Oswald Boateng and Camilla Rutherford in the cobblestone courtyard of the neoclassical building to watch Lily Cole switch on the Christmas tree lights before taking to the ice.

STELLA’S ENCORE FOR GAP: Stella McCartney will create a second collection for GapKids and Baby Gap following the success of the first, which debuted earlier this month, WWD has learned. Later today, Gap Inc. plans to reveal McCartney will produce a spring collection for the retailer that will debut in March. Bestsellers from the winter collection include the Miller naval jacket, named after the designer’s eldest son, Miller Alasdhair James Willis. McCartney had originally signed on for just one season with Gap.

PICKS AND PANS: Crisis? What crisis? The ongoing auction of objects belonging to Pierre Bergé and the late Yves Saint Laurent is already exceeding initial forecasts, according to auctioneer Christie’s. After two days, 4 million euros inclusive of charges, or $6 million at current exchange rates, have been raised, topping initial estimates of 4 million euros excluding charges from the entire four-day sale, which winds down Friday. Among the surprises, a set of pots and pans which, estimated at 700 euros, or $1,044, went for 15,000 euros, or $22,379.

SHOP BOP: Two normally behind-the-scenes talents got their turn in the spotlight last week. At Armani/Ristorante, Harper’s Bazaar and Giorgio Armani feted photographer Glen Luchford’s first monograph, “Glen Luchford,” with cocktails that drew Craig McDean, Rachel Roy, Chris Benz, Rie Rasmussen and Victor Demarchelier. And the process of sifting through his early Nineties work for the book had Luchford waxing nostalgic. “I think I was a better photographer back then,” he said. “I was looser and freer and didn’t consider anything like politics.”