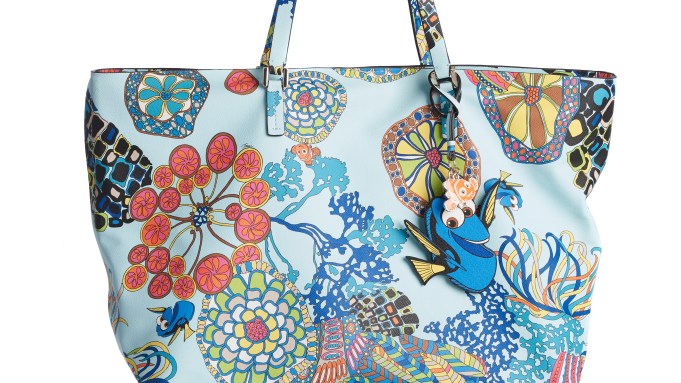 Trina Turk has collaborated with Disney on a family beachwear collection inspired by Disney Pixar’s animated fish tale “Finding Dory,” which hits theaters June 17. The collection comprises beach apparel and accessories for men, women and kids. This is the first designer beachwear collection for Disney Consumer Products and Interactive Media, as well as the first time the entertainment giant has collaborated with Turk.

Dory, the blue tang fish first introduced in the “Finding Nemo” movies, and the other Disney ocean characters are hidden throughout a custom print evocative of Turk’s Sixties- and Seventies-inspired style. “The inspiration for the print came from the film’s background art, with Dory and Nemo swimming through bright multicolored seaweed, coral and anemones against an aqua background,” said Turk, who founded her company in Los Angeles in 1995.

Pieces include a Trina Turk one-piece swimsuit, a bandeau bikini, Mr. Turk swim shorts and a tote bag. The collection will launch later this month in Trina Turk boutiques, on TrinaTurk.com and DisneyStore.com, as well as at Dillard’s, Macy’s, Lord & Taylor and specialty boutiques. Retail pieces range from $48 to $228.