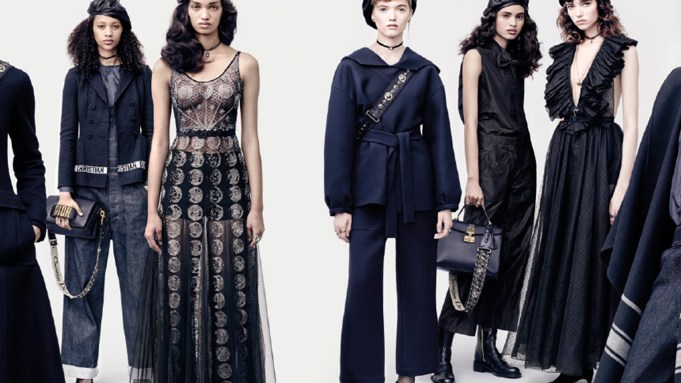 The feminist attitude Maria Grazia Chiuri has ushered in at Dior is alive and well in the house’s fall campaign. Brigitte Lacombe shot a small army of models, including Ruth Bell, Grace Hartzel, Adwoa Aboah, Selena Forrest, Fernanda Ly, Ellen Rosa, Aira Ferreira, Jing Wen and Camille Hurel, in group shots wearing looks from the fall blue collection that was full of Patty Hearst-esque berets. There’s a slight militaristic mood to the shots due to the plethora of berets, cross-body bags, military jackets and combat boots shot against a stark white background. Dior’s press office described the concept as a play on “perspective, asymmetry and space to create dynamic composition.” That dynamic composition is captured in motion in a short black-and-white video directed by Fabien Baron that will accompany the campaign.