Trussardi and Coca-Cola Bottle Up

The companies have partnered on a series of limited-edition cans and bottles. 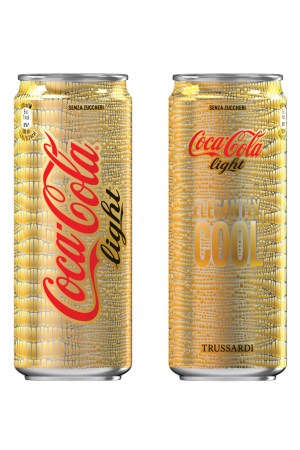 SPIN THE BOTTLE: Trussardi and Coca-Cola are bottling up.

From now through the end of the year, three limited-edition Coca-Cola Light cans enhanced with Trussardi designs will be on sale at select distributors and in exclusive restaurants and cafés around Italy. Two of the 330-ml cans — scrawled with Elegantly Cool — feature the Trussardi greyhound motif in colors such as acid green, purple and cherry red, while the third can offers a shiny gold take on the fashion brand’s traditional lizard print. Five hundred-ml and 1.5 liter bottles of Coca-Cola Light will be similarly decked out.

For those who prefer Coca-Cola in all its sugary glory, Trussardi is also dressing up two original Coca-Cola bottles, melding the companies’ signature brown, gold and red hues and working a miniature greyhound symbol into a new pattern to celebrate the bottle design’s 100th anniversary. Each will be available in a special 330-ml version at Milan’s world exposition, currently underway, and at the Café Trussardi by the city’s Piazza della Scala, until the fair ends in October. A 250-ml version of the bottles will be on sale from August to September at select locations in Sicily.

“We are particularly happy to extend our lifestyle to a global [colossus] such as Coca-Cola and especially to be the first to dress Coca-Cola, a brand which really is famous all over the world,” said Trussardi creative director Gaia Trussardi, calling the American company’s bottle and logo “cult” items.

“Both parties were very enthusiastic about the collaboration, which simultaneously underlines the Italian nature of Coca-Cola and the brand’s proximity to our national specialties,” said Fabrizio Nucifora, marketing director of Coca-Cola Italia, adding: “Moreover, while past versions of Coca-Cola Light are already famous in the fashion world, 2015 will make history because not only will a maison dress the [original Coca-Cola] bottle for the first time but it will do so in the year of its centenary and the year of Expo Milano 2015.”

While the assorted cans and bottles are hitting shelves, Trussardi and Coca-Cola will kick off an integrated marketing campaign in Italy, with an online photography contest and social media push. In Milan, the Trussardi graphics used on the Coca-Cola Light cans will also appear in the store windows of the Coin department store in Piazza Cinque Giornate, which is promoting the Trussardi brand throughout June.

Coca-Cola Light is no outsider in the fashion industry: previously, the company had collaborated on limited-edition cans and bottles with brands such as Moschino, Roberto Cavalli, Marc Jacobs and Salvatore Ferragamo.