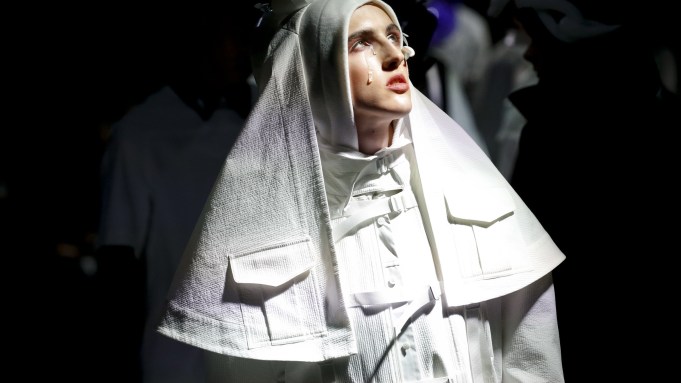 “There is a very singular image of Asians in Western media and we really wanted to show how diverse we all are,” Li told WWD backstage. ‘We wanted to invite others to come and see what we are – cool and fun.”

The duo drew from Asian culture from the Nineties with a strong emphasis on Japanese subcultures such as punk and mixed in elements of BDSM, grunge and traditional Chinese detailing for an exciting collection that voiced opposition to stereotypes seen in Western media. Mandarin buttons were seen on deconstructed bomber jackets, kimonos were reimagined in plaid — a staple fabric in grunge — and laced with chains and leather harnesses. Outerwear featured slim kimono sleeves ruched up, giving a nod to how the Japanese would wear theirs while working, and a series of vegan leather jackets gave the collection another layer of street cred.

“We see individual characters on the streets of New York such as Asian kids dressed as punks, grunge and hip hop, but they still carry the Eastern philosophy within them because that’s who we are and that’s what we wanted to show with this collection,” said Qu.

Staffonly looked at issues of alienation and emotional fragility with its collection, which was strong on outerwear in pre-shrunk wool, cotton and technical waterproof fabrics in oversized silhouettes.