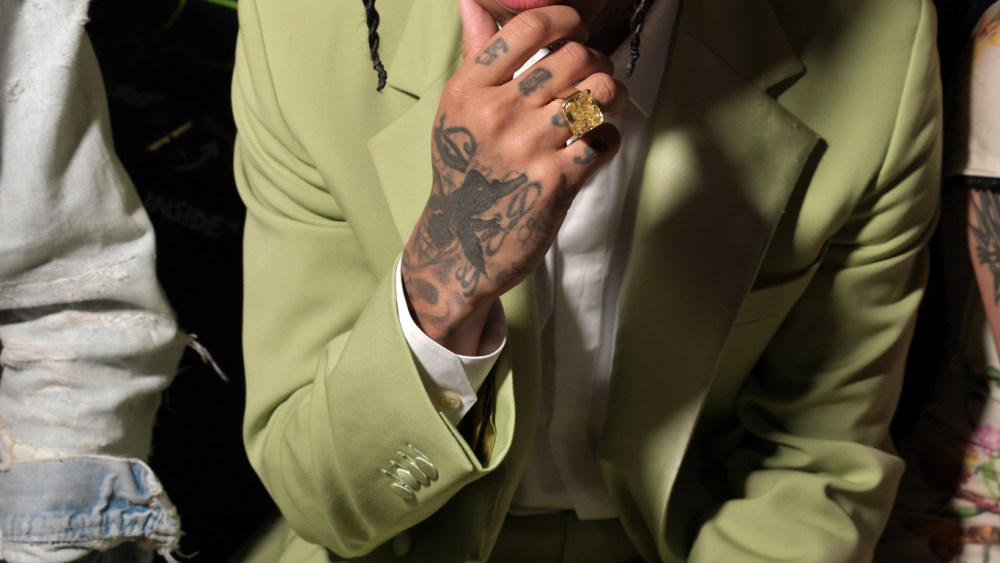 WINTER IS COMING: “Summer’s over,” Vic Mensa said, sitting front row at Y/Project on Thursday in Paris, echoing the title of his new single with Keyon Christ, released on Sept. 24.

“It’s time to move on. Fall is the time where you wear furs down the Champs-Elysées. You can’t do that in the summertime,” he said, albeit with vested interest: He was wearing an oversize Y/Project faux fur. “Pimps be hot in the summer.”

But furs aren’t the only reason the musician loves the brand, which is designed by Glenn Martens. “Y/Project is so dope. It reinvents silhouettes. Like these pants, they look like they’re sagged already even though they’re pulled up to your waist. It’s amazing. My mom wouldn’t even be mad, since my underwear isn’t even out, but I still get to sag.

“I like the fall and winter, because you can layer up. I feel like all the best clothes are made for winter,” said the West Coast rapper, who might not use his cold-weather gear immediately. He will embark on an Australia and New Zealand tour starting Oct. 18 in Brisbane.

When would he need a coat? “I like to keep everything a secret. People have to follow up and see whenever I drop stuff. Instagram would be a good place to look,” he said.

Sitting between them after being spotted earlier in the day at the Redemption show, a brand she has worn several times recently and appreciates for their “really delicate, feminine fabrics used in a sort of androgynous way,” fellow musician Halsey was looking at clothes with an eye toward her upcoming European tour.

She described her new album, “Manic,” due out in January, as refreshing to fans. “It’s very personal, very conversational, it’s a breath of fresh air for me so I’m very excited for everyone to get to hear it,” she confided. “But there will be songs released before them. With 16 songs on the album, I have plenty to give away between now and then.”

Although she already had some outfits courtesy of 93Punx, the line Mensa launched 10 days ago at NYFW, she was still shopping. “I’ve been doing a lot of it. The vintage shopping in Paris is the best in the world,” she said. And if she got a little too enthusiastic, she already had a plan in place. “I could always leave my suitcases and pick them up when I come back in a few months,” Halsey mused.