While the British native is known for her modeling work, partnering with the footwear company has allowed the 28-year-old to reveal her outdoorsy side. 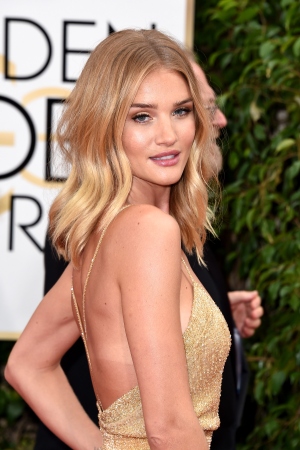 ROSIE FOR UGG: Ugg has tapped Rosie Huntington-Whiteley as the face of its fall campaign, WWD has learned. An announcement will be made later today.

“It’s exciting and fun, and I think it’s going to be really different kind of partnership for me,” Rosie Huntington-Whiteley told WWD. “It’s a way to showcase a different side to my personality.”

The British native is known for working with brands including Victoria’s Secret, Burberry and Paige Denim. She starred in films including “Transformers: Dark of the Moon” and “Mad Max: Fury Road.” Earlier this year, she expanded her line with Marks & Spencer to include a beauty range. While the 28-year-old is known for her sexy modeling work, partnering with the footwear company has allowed Huntington-Whiteley to reveal her outdoorsy side.

“They’re something I’ve had when I’m heading home. I grew up in a farm in the U.K. In the countryside, I’ll always have a pair with me. They’re part of my active and adventurous lifestyle. I’ll wear a pair on the beach when I’m walking the dogs in the winter. They’ll be packed in the back of the car on a road trip on the coast in California. I put my feet in a pair literally every morning. They are snuggle shoes that I wear around the house. During my free time — that’s when I have a connection to them. It’s more of personal thing to me than a designer handbag or jacket.”

The brand said it would announce campaign details in due course and Huntington-Whiteley will be featured wearing the brand’s Classic II boot, which will launch in August.

“Although we don’t shoot until later this month, the Classic II campaign will mark the biggest re-launch the brand has ever seen in its 37-year history,” Alice Hampton, senior director global of public relations, told WWD.

“It was important to partner with someone who has a natural love and affinity for the brand, but who could also translate the new street-style features and benefits into their everyday on-the-go lifestyle. I think the biggest insight is that it will be showcased in a very attainable and fun way as Rosie’s warmth and effervescent personality is a key component to the creative. It is not just about working with a beautiful face.”