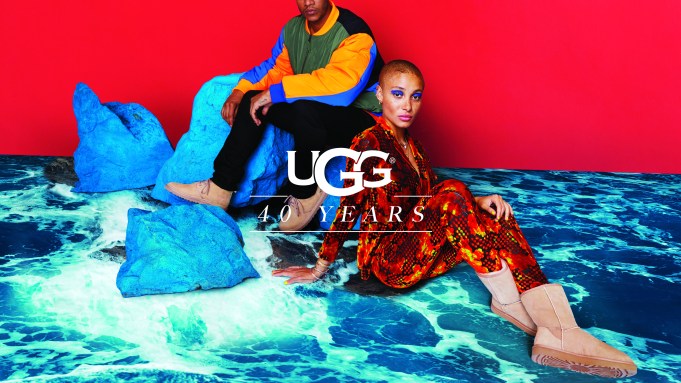 Ugg is celebrating its 40th anniversary by looking back and forward with a new campaign featuring Heron Preston and Adwoa Aboah.

The campaign, shot by photographer and visual artist Erik Madigan Heck, goes live on Thursday and has Preston and Aboah wearing its 40:40:40 collection, a limited-edition range of product reissued in its most beloved styles — Classic Boot, Tasman, Ascot, Neumel and Jesse II — in the original colorway, Sand.

Heck brought a fine art sensibility to the campaign by reimagining California landscapes such as Big Sur and the Redwood Forest in saturated sets with bold patterns, such the sea of poppies, California’s state flower. But it’s the personalities wearing the product that make perhaps a stronger statement.

“We wanted to take the opportunity to look back to who we are as a California lifestyle brand that’s been embraced by bold and provocative people, so the images respect our heritage while featuring product on people we have connected with, but who may not seem like the people who’ve expressed the brand over the last 20 years,” said Andrea O’Donnell, Ugg brand president.

The campaign follows one that featured “unexpected” Ugg fans such as Kim Gordon, Kyle MacLachlan and Cherry Glazer versus quintessential California girl Kate Hudson, who helped make the cozy footwear aspirational when she was photographed in them running errands in Malibu in the early Aughts.

The footwear is certainly known within the designer community as well, but Uggs aren’t commonly worn on red carpets and runways. Jeremy Scott helped to raise Ugg’s luxury cred when he designed a capsule embellished with hot rod flames and Swarovski crystals, and now it’s Preston’s turn to put his take on the shoes.

The designer teased his relationship with Ugg at Coachella in April, customizing classic styles for a handful of his friends, but he will design a collection from the ground up that he’ll unveil at his runway show in Paris in January.

“It’s the same as Jeremy but different, how someone like Heron respects and feels about the brand. He has a much more streetwear vibe, so his interpretation will look and feel quite different,” said O’Donnell.

“It was a pre-heat, to test and give myself time to create something from scratch,” said Preston. “I’m going to step it up further with materials and trims and colors, even the outsole,” he said.

Preston’s relationship with the brand began as an ironic expression. “I never really felt as though they were meant for me. I never saw my friends wearing them or people who I looked up to. Maybe there was that intention where opposites attract or some irony, like how Ian Connor wore Skechers for a long time, but what changed it for me was one day I was running to the store in my ‘comfortable footwear,’ sliders and socks, and I saw this kid on the Lower East Side wearing Uggs with his pants pulled over the boots. That looked fresh to me. Like they could have been Timberlands from far away. I was always hating on them, but seeing someone wearing them who looked cool.…I went to the Ugg store in SoHo because I was like ‘I’ve got to give these things a try.’”

Like most people, he was sold on the comfort and said “it was an instant purchase for me.” First they were his house slipper. Then he began wearing them to run to the bodega. That turned into wearing them to a bar, and on an airplane.

“Cut to me wearing them in Milan all day long. One day I was really feeling my outfit so I took a picture of myself and posted it on Instagram and that’s what got me the collaboration. My friend who worked with Ugg saw it and texted me immediately.”

For Aboah, the association with Ugg was aspirational when she was growing up. “It wasn’t necessarily my style, but all the girls in school wanted to look like the girls who wore them. You still approach things in kind of the same way you do in high school. Now they’re not considered ‘fashion world’ shoes, but now I have more confidence and don’t care what people think as much, so I just wear them with everything, like Rihanna wears them with all sorts of things, not just a tracksuit.”