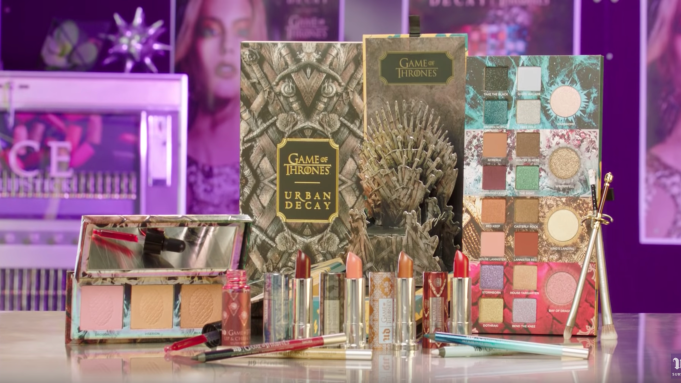 As any die-hard “Game of Thrones” fan knows, winter is coming. Now, so too is the popular franchise’s first makeup collection.

The hit HBO series has teamed with Urban Decay for a makeup line inspired by the show’s Seven Kingdoms and women of Westeros. The collection gives a nod to many elements of the show, including Emilia Clarke’s “Mother of Dragons” character and the houses of Targaryen, Lannister and Stark.

In a dramatized video featuring the “Game of Thrones” much-loved intro music, Urban Decay revealed today on its Instagram the full 13-piece collection, which will be released on April 14, the same day the show returns to HBO for its eighth and final season.

The collection features a 20-pan eye shadow palette, which includes a three-dimensional pop-up of the show’s famous Iron Throne. The palette includes colors ranging from earthy neutrals to shimmery jewel tones and are named after aspects of the show, including “White Walker,” a powdery blue, “Lannister Red,” a dark burgundy, and “Bend the Knee,” a shimmery purple.

The Mother of Dragons Highlight Palette gives a nod to the show’s three dragons, with dragon eggs embossed in each shade. The collaboration also includes two eye shadow brushes, designed in the shape of Arya Stark and Jon Snow’s swords.

The Urban Decay x “Game of Thrones” collection also includes a lip and cheek stain, four shades of the brand’s 24/7 Glide-On Eye Pencils and four shades of its Vice Lipsticks. The collection ranges in price from $19 to $65 and will be sold through the brand’s site, Sephora, Ulta Beauty and Macy’s.

Click through the above gallery to see more from the Urban Decay X “Game of Thrones” makeup collection.

John Varvatos Teams With “Game of Thrones” For Capsule Collection