In celebration of the 80th anniversary of Walt Disney’s “Fantasia,” Urban Outfitters has developed an exclusive men’s collection inspired by the movie.

“Fantasia” consists of eight animated segments set to pieces of classical music conducted by Leopold Stokowski, seven of which are performed by the Philadelphia Orchestra.

“The Sorcerer’s Apprentice,” for example, showcases Mickey Mouse as an aspiring magician who oversteps his limits, and “Dance of the Hours” is a ballet performed by ostriches, hippos, elephants and alligators.

The Fantasia Collection features graphic T-shirts and sweatshirts, which combine Disney’s artwork with Urban Outfitters’ street-style aesthetic. The exclusive collection will be available at all Urban Outfitters stores and online at urbanoutfitters.com, starting today. The Ts are $34, and the hoodie is $69.

Sizes run from small to XXL. 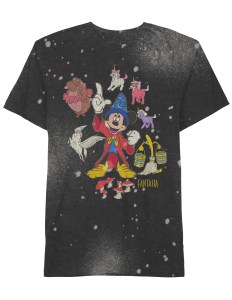 A “Fantasia” T-shirt for Urban Outfitters.

Gabrielle Conforti, chief merchandising officer of Urban Outfitters, said, “As a personal Disney super-fan, we’re excited to celebrate ‘Fantasia’s’ 80th anniversary and bring the nostalgic Mickey sorcerer graphics to the modern Urban customer. Plus, fun fact, it was recorded by the Philadelphia Orchestra, where Urban is headquartered.”