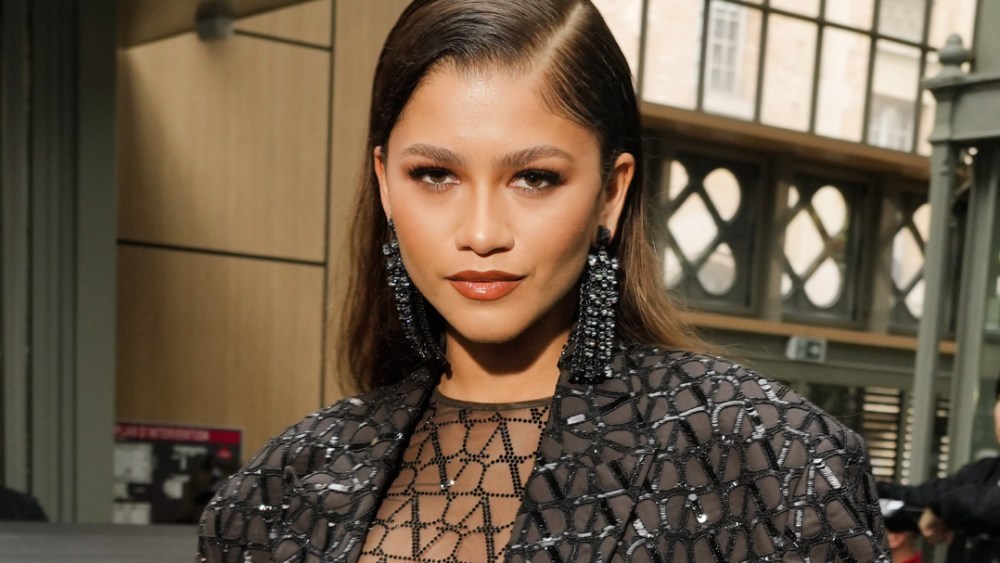 At the Valentino show, there were several camps. In the first one, those who went for hot pink on this rainy Sunday — Pink PP preferred.

Among them Erykah Badu, who swept in looking regal in a floor-length marabout trimmed coat with a matching high hat. It made her easy to spot when she sprang from her seat to capture the finale and applaud Pierpaolo Piccioli’s spring collection.

Florence Pugh also was team pink, although she went for a softer hue with a high neck mini number with a chain design.

Others took a cue from the all-black invitation for their looks, led by Naomi Campbell in a roomy tailored jacket and crisp white shirt with a plume of marabou feathers replacing a tie.

Valentino Pink PP may have become a key color over the last few months but “black and white is timeless too,” said Ashley Park, posing in her daring mid-riff ensemble as model Cindy Bruna arrived wrapped in a voluminous black textured peacoat.

Turns out everyone had the right color on themselves, one way or another.

“You’ll see [why],” teased Zendaya with a laugh when asked which team she was on. Though her coat featured jet-black beading, a hint was hidden underneath. Long-term stylist Law Roach, next to her, leaned over to stage whisper: “It’s brown, darling.”

Others still went their own way, like the recently wed Nicola and Brooklyn Peltz-Beckham. She was wearing a translucent embroidered top and blue denim, while her husband had slipped a checked jacket over his T-shirt and jeans outfit.

The pair were treating their Parisian stay as an extension of their honeymoon, especially since members of both families were in town, including Victoria Beckham, who made her debut in Paris on Friday.

“We’re kidnapping as many family members as we can….It’s my brother’s birthday today,” Peltz said, revealing they would be celebrating with a dinner later in the evening. But after this, it would be back to work for both spouses.

While Beckham couldn’t share details on the show, Peltz was excited about finishing the postproduction of “Lola James,” her debut as a director in the film she authored and stars in, “based on people in [her] life.”

“It’s like my baby, a very intense process and I feel very vulnerable but very excited to share it with you,” she said, as Beckham declared it “so good — not just because she’s my wife.”