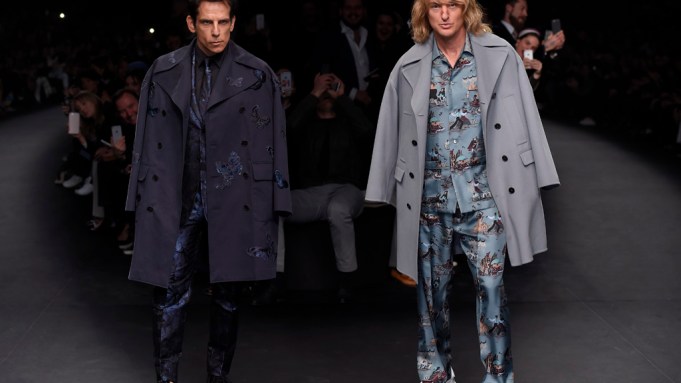 As editors and attendees anticipate Valentino’s spring 2016 couture show, WWD looks back at one of the most talked-about moments on the runway — which also marked the return of “Zoolander.”

Pierpaolo Piccioli and Maria Grazia Chiuri have brought a renaissance to the Italian house since taking the helm as co-creative directors in 2008.

Last fall, they cast “Zoolander 2” stars Ben Stiller and Owen Wilson, who made an appearance at Valentino’s 2015 fall ready-to-wear show.

The pair strutted down the catwalk to the sound of The Human League’s “Don’t You Want Me,” throwing the signature “Blue Steel” look at cameras and prompting loud cheers from editors and celebrity guests including Kate Mara, Olivia Palermo and Nicky Hilton.

On his way back, Stiller grabbed a cell phone from Vine celeb Jérôme Jarre, who had been planted in the front row, and filmed himself as he walked off. The actors made a quick exit after the show, but later turned up alongside Jarre in front of the Eiffel Tower, where the social media star called for fans to join them.

Later that evening, Stiller told WWD that filming for the sequel of the movie started in Rome in last April and that the seven-year-old Valentino documentary, “The Last Emperor,” inspired him to film the sequel in the Eternal City. “Rome is the most cinematic environment,” the actor said.

The sequel, which took 14 years to make, created something of a sensation when its trailer finally dropped in November.

Derek Zoolander, played by Stiller, was also featured alongside costar Penélope Cruz on the cover of February Vogue in anticipation of “Zoolander 2,” which opens in theaters on Feb. 12.