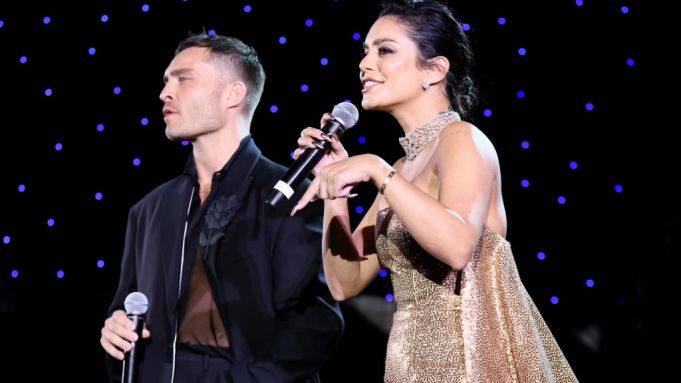 Vanessa Hudgens made an impression with her fashion look at the LuisaViaRoma for UNICEF charity gala.

The actress attended the charity gala in Capri, Italy, on Saturday wearing a custom Michael Kors dress. Hudgens’ look was a strapless gold minidress embellished with sequins and accented with a matching cape. She paired the look with matching gold platform sandals and a diamond choker. The look was styled by Hudgens’ stylist Jason Bolden.

Hudgens was among the many celebrity attendees at the LuisaViaRoma for UNICEF charity gala. She was joined by stars including Jamie Foxx, Leonardo DiCaprio, Jared Leto, Spike Lee, Ansel Elgort, Ed Westwick and many others. Jennifer Lopez also lent her star power to the charity event, making her first performance since getting married to Ben Affleck last month.

Hudgens spoke to WWD about her excitement over seeing Lopez’s performance, which included her hit songs like “If You Had My Love” and “Waiting for Tonight.”

“It’s a classic and the music video is so iconic,” she said, referencing the latter song. “I’m just so happy to see her and so excited for her and her new marriage.”

This is the sixth iteration of the LuisaViaRome for UNICEF gala, and the biggest in the event’s history. The night garnered 8 million euros in donations to UNICEF.