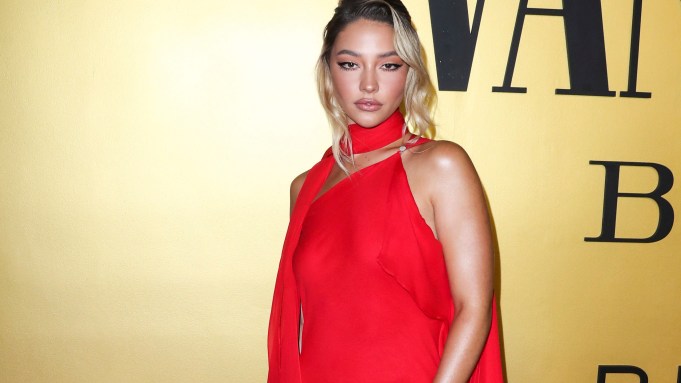 Vanity Fair’s A Night for Young Hollywood on Tuesday night saw a slew of big, rising stars in the movie industry.

Among those who attended the event, held at Musso & Frank in Hollywood, Los Angeles, were Joey King, Sabrina Carpenter, Kat Graham, Alana Haim and  “Outer Banks” stars Madelyn Cline, Chase Stokes and Madison Bailey, among others, who each wore their own standout look. The annual event was hosted by Alana Haim, best known for being part of the sister band Haim, Ariana DeBose and Giveon.

Cline wore a vintage red dress by Halston found from renowned vintage store Tab Vintage. She styled her hair in an updo with strands of hair framing her face. Cline was styled by Mimi Cuttrell, who also works with the likes of Gigi Hadid and Ariana Grande, among others.

King wore an all-black ensemble by Givenchy, featuring a zip-up blazer and shorts. She matched her look by wearing dark eye makeup and a deep red lip. “The Act” star was styled by Jared Eng.

Graham, best known for her role in “The Vampire Diaries,” wore an outfit by Greek designer Celia Kritharioti, which was a pink long sleeve top with a red maxi skirt. Carpenter wore a pink two-piece set by Versace and was styled by Jason Bolden.

Click through the gallery above to see some of the best looks of the Vanity Fair Hosts Vanities Party: A Night for Young Hollywood.

The Standout Fashion Looks From the 2022 Independent Spirit Awards