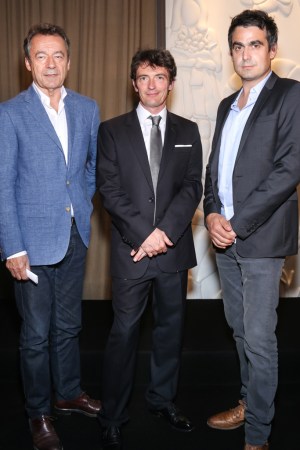 On Tuesday at a ceremony at Paris’ La Société restaurant in Saint-Germain-des-Prés, he received a check worth 6,000 euros, or $6,755 at current exchange from the Association Françoise Sagan and Louis Vuitton given by Vanity Fair France’s editorial director Michel Denisot and Denis Westhoff, Sagan’s son and the prize’s founder.

Sagan, who became an overnight sensation at the age of 19 with her novel “Bonjour Tristesse” (or “Hello Sadness”), had a penchant for fashion.

“She was close to Yves Saint Laurent, Christian Dior and Emanuel Ungaro,” said Westhoff. “She had a classic, elegant and refined style — even in her jeans, blouse and scarf. She would dress up in the evenings.”

Denisot, sporting a blue Ralph Lauren jacket and pants from The Kooples, said there are many similarities between Sagan and the magazine: “modernity, elegance, abrasiveness.” Vanity Fair France, which turns two this month, had domestic paid circulation of 101,309 in 2014.

Top is a fan of Sagan’s lesser-known book “Avec mon meilleur souvenir” (or “With Fondest Regards”), a collection of profiles of the likes of Carson McCullers, Tennessee Williams and Orson Welles.

Darré, meanwhile, was in the mood for opera. He created costumes and décor for “La Traviata” that will be performed in seven French historic landmarks over the summer, ending at the Hôtel National des Invalides in Paris from Sept. 8 to 12.

“The costumes are a tribute to 19th-century French caricaturist Granville,” he said. “It’s like a fairytale. I had lots of fun [doing them].”

The interior designer is also behind a capsule collection of chairs for La Redoute set to launch in September, and the revamp of Le Montana, a hotel and its restaurant, called La Gauche Caviar, which is scheduled to open during upcoming Paris men’s wear season following a long delay in the construction.

“That’s why I am wearing white shoes today. I am just coming from Le Montana; you don’t see the dust on white. It will be exuberant,” he said, of the project.

For her part, Beltrami was wearing a vintage Yves Saint Laurent skirt and long silver earrings that she designed.

“I took old jewelry sketches I did in the Seventies and created a ‘warrior collection,’” she said. “I’ll present it in September.”