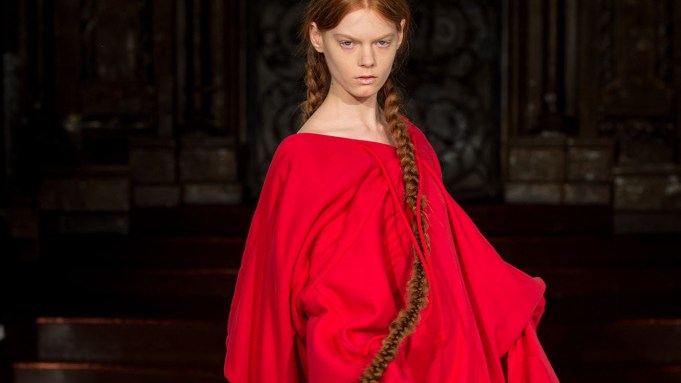 Before fans of the Hulu series “The Handmaid’s Tale” have to say goodbye to the eerily topical dystopia of Gilead June 14 when the show’s season finale airs, Vaquera codesigners David Moses, Patric DiCaprio, Bryn Taubensee and Claire Sully gave fans in New York a little extra fix of white bonnets and red robes. They staged a “Handmaid”-inspired fashion show/performance art piece Thursday that rivaled the show/Margaret Atwood’s book’s plot line for riveting weirdness. Shown at the Angel Orensanz Foundation, the show featured a lineup of handmaids — male and female, all ages, sizes and ethnicities — in deconstructed versions of the show’s red robe/white bonnet uniform. One wore a white robe draped in cone bras; another held an umbrella shrouded in white gauze. Another wore what looked like red couch cushions. One by one they aggressively stomped around the square white stage, eventually standing in the center and giving a little personal performance. “We wanted people to come into the middle and express themselves in different characters,” said Sully. “It was taking the forced identity of the handmaid and subverting it,” said Moses.

Lest anyone think the show was the result of creative superfans, the Vaquera collective started work on the project before the series aired. “We hadn’t seen the show, though I had read the book,” said DiCaprio. Hulu approached them as part of a series of “activations with artists to make people talk about the show,” said Sully. “Hulu really wants people to not just watch the show but be talking about the show’s messages.” Apparently it’s working. The series has been picked up for a second season.