The exhibit aims to tell a comprehensive story of designer Vera Neumann and help cement her place as one of America's first lifestyle brands.

"Vera Paints a Scarf," an exhibit at the Museum of Arts and Design.

American designer and entrepreneur Vera Neumann is known for her iconic scarves and color mixing, often looking to the outside world when building her work, saying “if you follow nature, you can never go wrong.” She used the living world to inform her color combinations, many that were thought to be radical as she came into her own in the Fifties and Sixties.

In fact, Neumann was one fashion’s first true lifestyle brands, and while she was a trailblazer in her day, it’s a position in design history that she isn’t always given credit for, but a new exhibit at New York Museum of Arts and Design, called “Vera Paints a Scarf” aims to change that.

“I wanted to create an exhibition that was comprehensive,” explained Elissa Auther, the curator of the exhibit. “She is an important figure in 20th-century design history, but it’s not well integrated into that official history. I think partly because of her commercial successes and partly because of her gender, but I felt that was something that needed to be addressed.”

The exhibit, which opened this past weekend, uses around 250 pieces of Neumann’s work to tell the story, and begins with the artist behind the brand, using a selection of Neumann’s paintings done in a Japanese ink painting technique, that her textiles are born from.

It explores her work with a broad scope, using objects produced between 1950 and 1980, viewers will see works on paper, archival photographs, garments, her iconic scarves and also ephemera related to the designers numerous marketing campaigns with employed the tagline “Vera paints…” to promote pieces from her lifestyle brand.

“Her patterns and scarves really channel contemporary painting,” Auther said of Neumann’s work. “She intervened into a market with a dose of color and whimsy that made a huge impact, it was both suitable for the ordinary suburban home but then also it also humanized a much higher-end part of art and fashion.”

A key part of the exhibit is Neumann’s keen eye on marketing and adverting her work, an idea is used throughout the exhibit help to anchor her place as one of the first mass market, commercially successful brands in American fashion. 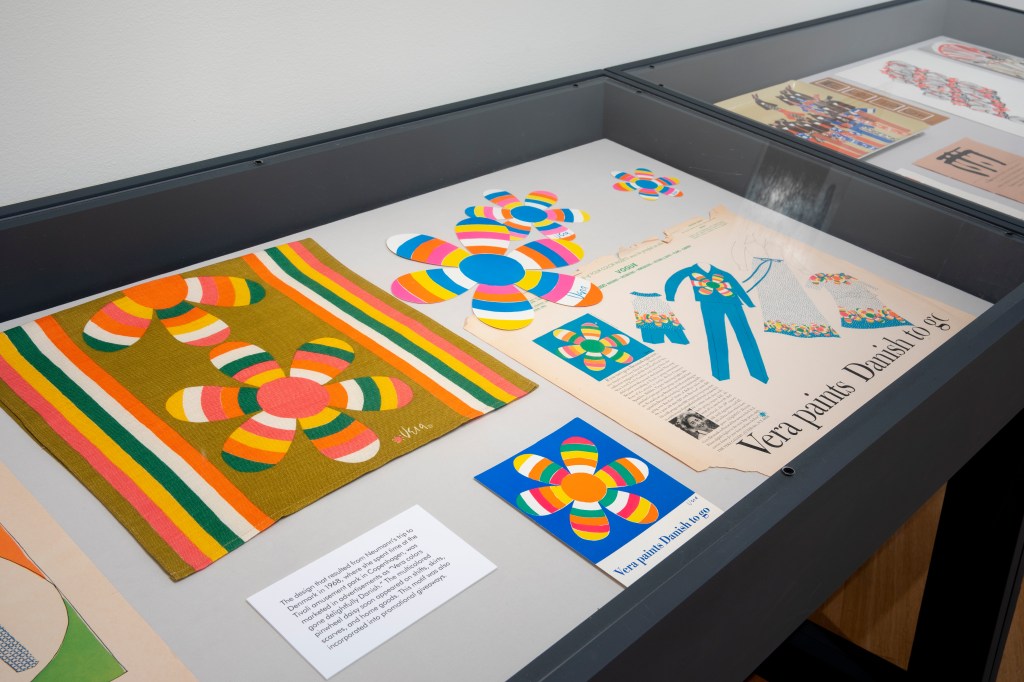 Part of “Vera Paints a Scarf,” an exhibit at the Museum of Arts and Design.  Jenna Bascom

“It really takes the viewer through the process from a painting to the design, to then how the product was marketed to the consumer,” Auther explained.

Her impact, says Susan Seid, the exhibits largest lender, can still be felt today. Seid owns much of Neumann’s original artwork and has written several books on the designer.

“[Viewers] will be amazed that here was a woman, in the Forties she started, she was an artist, that alone was unheard of. And then, she had great commercial success. She was a $200 million business and was in 20,000 stores around the world,” Seid said of Neumann’s reach.

At her height, Neumann held copyrights to more than 8,000 designs that spanned a variety of categories.

“The way she worked with color, back in the Sixties and Seventies, it was very forward.” Auther added, “but it lives on, you can see it in pieces on the market today. You can still see Neumann’s impact in the works of modern designers like Kate Spade, Jonathan Adler and Trina Turk.”

“Vera Paints a Scarf” is open now and runs through Jan. 26 at the Museum of Arts and Design.