Guests including Donna Karan, Alber Elbaz, Rebecca Moses and Patrick Demarchelier turned out for the ceremony at the Hôtel National des Invalides. 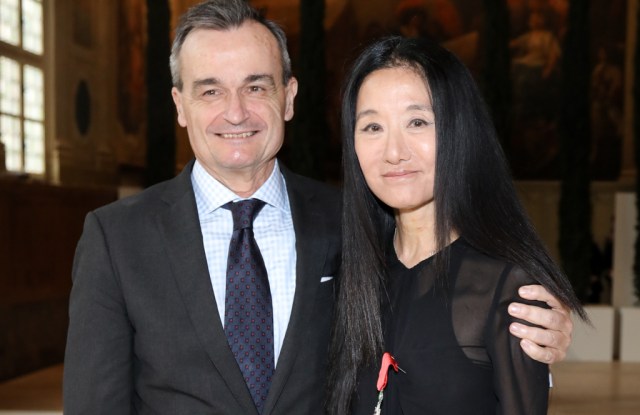 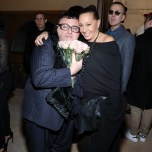 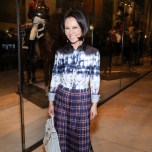 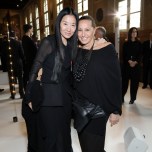 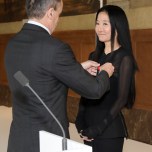 “Merci, de tout mon coeur,” Vera Wang said in flawless French as she took to the stage after being honored with the Chevalier of France’s National Order of the Legion of Honor. “This is an unimaginable honor, both as an American and a designer.”

Araud recounted how Wang first came to France as a young girl to study figure skating and dance, later returning to attend the Sorbonne and work as a sales associate for Yves Saint Laurent. Back in the U.S., Wang joined American Vogue before launching her line of bridal wear.

“Paris shaped my life, Paris nurtured me, Paris inspired me, embraced me and Paris changed me,” Wang said.

“No one I know in fashion who has ever had the privilege to live and work in this city has not emerged a more artful, experienced or sophisticated thinker, and although skating and dance initially brought me to Paris, if it weren’t for my love of Paris and fashion, that first began here, certainly I would not be here today.”

Anna Wintour, who met Wang when she joined the publication in 1983, was unable to attend the ceremony but had Hamish Bowles read a letter she wrote for the occasion.

“When I think of our time together, that’s what I always remember: No one was more industrious than you. That and the fact that no one at Vogue was funnier or louder or more neurotic or more endearing,” the letter read.

Karan praised her longtime friend and colleague for her passion and commitment. “Sophistication, purity — she’s completely stayed on line, and it’s very rare today to find that a designer has a point of view,” she said.

Moses has known Wang since the age of 18. “She was my first editor at Vogue. That’s how we met, and we’ve been friends ever since,” the fashion designer and illustrator said.

“I’m proud of her and I’m proud for her,” Moses added. “France is such a great country, but in the world of fashion, it’s the shining star, and I think that to be recognized by the French is certainly a great honor and such a prestigious award. When they told her, she was just so emotional and so in shock, and really without words — for the first time in Vera’s life.”

Elbaz came with a bouquet of pink roses for his friend. “I just got it and they told me that it looks like a bouquet for a bride, so here we are!” he said. “Doing bridal dresses for women, it’s one of the most important dresses in every woman’s life. Every dress that I did for a bride, I became part of their family, so I guess Vera has a huge family by now.”