Vera Wang may have missed the U.S. Olympic team, but she’s still being inducted into the U.S. Figure Skating Hall of Fame. 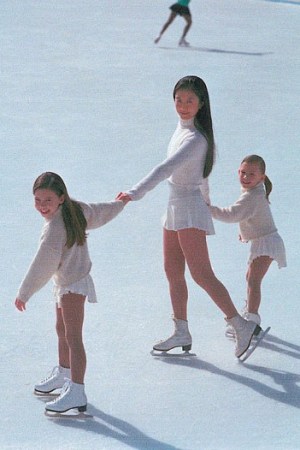 VERA’S GOLDEN SKATES: Vera Wang may have missed the U.S. Olympic team for figure skating, but she’s still being inducted into the U.S. Figure Skating Hall of Fame — for her contribution to costume design. The designer will be honored Jan. 23 at this year’s U.S. Figure Skating Championships in Cleveland. She started skating at age eight and competed in the sport’s annual championship in 1968. That same year she was singled out as one of Sports Illustrated’s Faces in the Crowd. Wang launched her fashion career after not making the U.S. Olympic team. But she managed to keep a foot in her favorite sport, by designing costumes for two-time Olympic medalist Michelle Kwan and silver medalist Nancy Kerrigan.

Wang, who joins the ranks of Peggy Fleming, Dorothy Hamill, Kristi Yamaguchi and Scott Hamilton, said, “Skating was a chance for me to express myself in a creative way. It was the blend of all worlds — music, dance, athletics, choreography and, of course, costumes. From an early age, I really fell in love with what a body could look like, what it could do, what you could express and how you could look.”

This story first appeared in the January 14, 2009 issue of WWD. Subscribe Today.

ALBER’S NEW TIME: Bravo, Alber Elbaz. The Lanvin designer is giving us some good news amid all these economic doldrums. He’s moved his fall runway show up from his usual slot on the last day of Paris Fashion Week to its start: His presentation will now follow Christian Dior. Elbaz’s oh-so-thoughtful reason? He wants to make it easier on editors and buyers traveling on a tighter (read: cost-cutting) schedule.

REDOING THE WHITE HOUSE: Now that cabinet positions and canine choices largely have been sorted out, the Obamas have filled another crucial role. Word is the couple has tapped Michael Smith as the new White House decorator. Based in Los Angeles, but active in New York and London, too, Smith’s client roster brims with power players including Steven Spielberg, Rupert Murdoch, Peter Chernin, Michelle Pfeiffer, Cindy Crawford, John Thain and Sir Evelyn de Rothschild. Notwithstanding the heavy-duty profiles of his clients, Smith is known for giving them comfort as well as understated style. And lots of laughs — Smith’s wicked sense of humor has been said to be his secret weapon.

THE GARDEN GROWS: Van Cleef & Arpels held what Emmanuel Perrin, the brand’s chief executive officer for North America, described as a “black-tie picnic” Monday at the Montage Beverly Hills hotel. The event introduced the company’s latest high jewelry collection, Les Jardins, to 150 clients and stylists, including Tanya Gill and Lisa Marie Boyd. Decorations at the greenery-laden event were patterned after four types of gardens — English, French, Italian and Zen — that the 100-piece collection, priced from $30,000 to $3 million, evokes. But Perrin had more to celebrate than just the new collection. He was giddy after Anne Hathaway, Eva Mendes, January Jones and Olivia Wilde wore Van Cleef & Arpels pieces to the Golden Globes. “I am very happy, especially since we never pay celebrities to wear our jewelry,” effused Perrin. And nearly the best part was that all of the jewelry made it off the red carpet and back to Van Cleef & Arpels safe and sound by Tuesday.