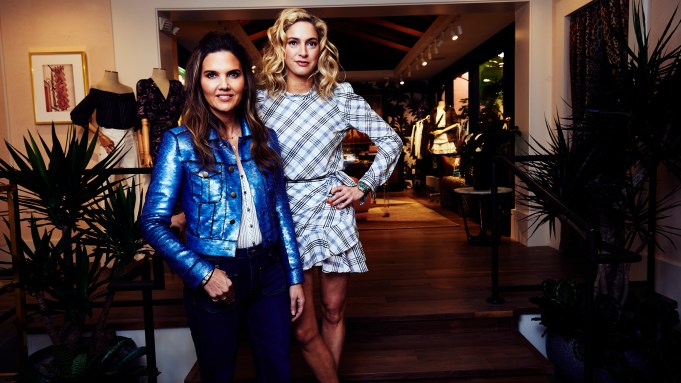 Veronica Beard is planting a flag on the West Coast with its first Los Angeles location, at 8471 Melrose Place. The 1,800-square-foot space, formerly occupied by Vince, is the eight-year-old brand’s fourth U.S. store opening since its retail debut in New York City in August 2016.

Codesigners and sisters-in-law Veronica Miele Beard and Veronica Swanson Beard have more plans to grow their retail footprint, at the same time propelling recent domestic and international growth via e-commerce and wholesale channels.

“Retail expansion is key to our current growth strategy,” said Veronica Miele Beard. “Having a bicoastal footprint in the U.S. is a compelling next step for us as we enter new markets in Europe and Asia. But we only open stores where we can get a deal [on rent], and where we think there will be growth opportunity.”

Like its counterparts in New York City and Dallas, the Veronica Beard store on Melrose Place will offer the brand’s full ready-to-wear collection, including its signature Dickey Jacket and feminine tailored pieces, plus its recently launched denim and shoe ranges. Limited-edition styles, third-party product and special collaborations will also be available, the first of which will feature items designed in partnership with fashion illustrator Donald Robertson. To celebrate the opening, Robertson hand-painted 10 jean jackets with one-of-a-kind illustrations ($995 retail) and codesigned a votive set that includes three scents inspired by the spring 2018 collection ($80).

Miele Beard and Swanson Beard worked with interior designer Carolina de Neufville to outfit the store with a pink facade and lush greenery outside and vintage furniture, paintings by local artists and custom display tables inside. Most furniture and art are also for sale.

“We put a great deal of time into curating an environment that our local customers will feel at home in,” said Veronica Swanson Beard. “No two Veronica Beard stores will ever be exactly alike, yet each is still an extension of our world. For Melrose Place, we selected a range of merchandise and third-party product that fits the lifestyles of our customers in Los Angeles, which is our biggest market after New York.”

The codesigners will celebrate with a cocktail party and private dinner on Wednesday evening, a day ahead of the official store opening.