Ornate military dress is displayed alongside kimonos and ukiyo-e prints. 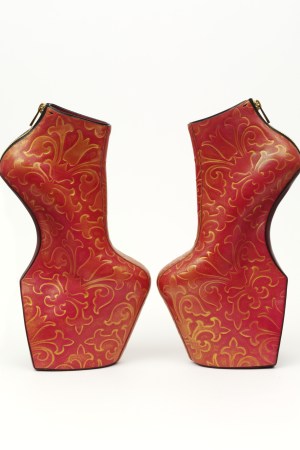 IN THE DETAIL: The Victoria and Albert Museum is taking a deep dive into Japanese culture — once again — with the reopening of the Toshiba Gallery of Japanese Art to the public after nearly three decades.

Originally opened in December 1986, the V&A space was the first major gallery of Japanese art and design in the U.K. The museum had been building the collection since it was established in 1852.

The gallery explores the history and traditions of Japan, covering themes such as religion and ritual; arts of the samurai; tea-drinking; theater and performance; fashionable dress and accessories; ukiyo-e and the graphic arts; Imperial Japan, and folk craft.

There are also films showing how to put on a kimono and obi sash; make a sword-fitting, and get dressed in a suit of armor.

Rupert Faulkner, senior curator of Japan at the V&A, has overseen the organization of the new gallery, which features a lineup of kimonos, including a silk tie-dyed example using safflower. Its color and long sleeves mark it as one worn by a wealthy young woman between 1800-1840.

Another, from the same period, has been made in lightweight fabric and dyed using a hand-drawn method. It shows iris embroidery that alludes to a celebrated piece of classical Japanese literature and features the crest of the Tokugawa — Japan’s ruling family.

There are several displays of traditional samurai military armor, and a wall hanging from 1750 showing the progress of a samurai putting on battle dress, from under garments to full battle armor. A nearby court sword from the 19th century has a scabbard of lacquered wood inlaid with mother of pearl and a handle covered in stingray skin.

There are tiny and beautiful pieces of military ornamentation in the form of hilt ornaments, used to give better grip to swords, in the shape of insects, birds or frogs.

Cabinets show examples of ukiyo-e, or pictures of “the floating world,” a genre of illustration or woodblock printing that became popular during the 17th to 19th centuries among the townspeople of Edo, modern-day Tokyo.

These show scenes of pleasure and hedonism of the period, including rich examples of courtesans going about their business of dancing or playing games wearing kimonos of varying patterns.

Among the other highlights in the collection is the Mazarin Chest, one of the most important pieces of Japanese export lacquer ever made, which was first owned by the French statesman and Catholic cardinal Jules Mazarin.

There is also “Woman at a Mirror,” a woodblock print from the series “Edo Beauties,” by Kikukawa Eizan, from about 1820, which depicts a woman with a side comb in her hair looking as if she’s about to apply her makeup and a collection of netsuke, the tiny toggles men would attached to the silk cords on the pouches that hung from their sashes. Among the netsuke is a detailed carving of a tightly curled rat from 1850-1900.

The show stretches to the contemporary with “Hello Kitty” kitchen appliances and a pair of heel-less shoes by Noritaka Tatehana from 2014, inspired by the vertiginously tall geta sandals worn by courtesans in the Edo period, 1615-1868.