The museum has acquired clothing worn by the U.K.'s first female prime minister, and it will be put on display in December. 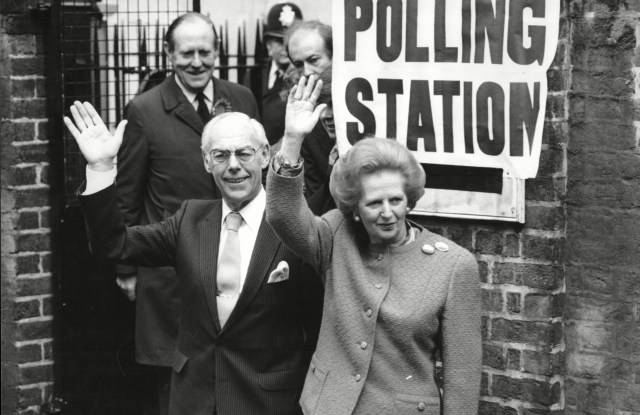 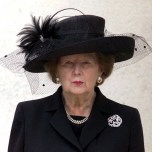 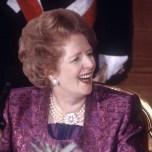 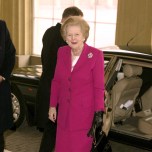 IRON LADY ENSEMBLES: London’s Victoria & Albert Museum has acquired clothing worn by Margaret Thatcher, and it will be put on display in December.

Six outfits, including looks worn during key events during Thatcher’s reign,were given to the V&A by her children Mark Thatcher and Carol Thatcher and grandchildren Amanda and Michael Thatcher. They will be showcased in the museum’s fashion gallery.

The looks include a royal blue wool suit and silk blouse, a pink brocade suit with a floor-length skirt and sleeveless silk cape designed by Aquascutum. Thatcher wore the pink suit to Lord Mayor’s banquet in 1988 at London’s Guildhall.

There is also a floral-print, silk crepe day dress created by Daphne Scrimgeour, Thatcher’s dressmaker. She donned the frock during the Commonwealth Heads of Government meeting in New Delhi in 1983. Other outfits donated include a navy blue silk dress with gold flowers designed by Jean Muir for a meeting with Crown Prince Akihito of Japan; and a wool fuchsia crepe suit, printed silk dress and black coat by Tomasz Starzewski. A Deida Acero wide-brim black hat that Thatcher wore to her husband Sir Denis Thatcher’s funeral in 2003 and to Ronald Reagan’s funeral in 2004 will also go on display.

“Baroness Thatcher was an internationally recognized political figure who used her wardrobe as a strategic tool to project power and inspire confidence,” said Claire Wilcox, senior curator of fashion at the V&A. “She was notable for supporting the British fashion industry, and patronized many of the leading designers of the day. Baroness Thatcher learned to dress for the camera whilst in office, and interestingly, amended her wardrobe after the House of Commons [proceedings] became televised in November 1989. This gift constitutes a record of the working wardrobe of one of the most influential and powerful women of the 20th Century, and will form an important addition to the museum’s fashion collection.”

Thatcher was the longest-serving U.K. prime minister and the first woman to have held the office. She was known for her strict economic policies and mantras of privatization, deregulation, small government, low taxes and free trade. Thatcher’s boxy handbags and Aquascutum skirt suits were an integral part of her “Iron Lady” look during her tenure, and she became well-known for her term “handbag economics,” which was all about living within one’s means.