The former Spice Girl touched down in Hong Kong after a stop in Beijing to promote her Victoria label. 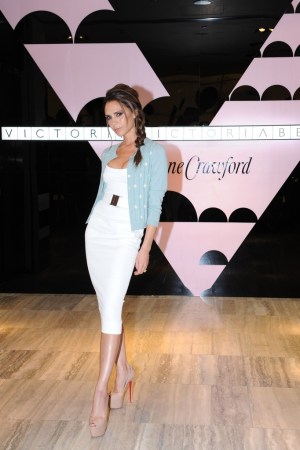 Victoria Beckham touched down in Hong Kong Wednesday morning to launch her Victoria, Victoria Beckham line at Lane Crawford. The former Spice Girl flew in from Beijing, the first stop on a whirlwind tour to unveil her latest collections and introduce a limited edition of the Range Rover Evoque she helped design.

“Asia is a very important market for me,” said Beckham, who spent the afternoon rubbing shoulders with Hong Kong celebrities, socialites and VIPs. “I love Asian women, I find them very chic, at the forefront of fashion.”

Clad in an elegant navy-black dress with a sheer insert, the fashion designer described her Victoria line as “the other side” to her wardrobe. A contrast to her signature form-fitting dresses, the collection features girly prints and more relaxed silhouettes.

Although she spent just under 48 hours in Hong Kong, Beckham appears to have made a strong impression. At the in-store cocktail party Wednesday evening, security guards struggled to hold the crowd back when the designer made an appearance. Slinking past in a figure-hugging white dress and mint cardigan, she posed briefly for the sea people snapping pictures with their smart phones.

Beckham touted her Asian customers saying, “[They] have most incredible physiques that actually work really well with my designs.” She added that she’d love to have a retail store in Hong Kong one day. “The women I’ve met here, they really love fashion, they are passionate and they want something different.”

Outside China, Beckham’s label has a presence in eight other countries in Asia — Vietnam, Malaysia, Taiwan, Singapore, South Korea, Japan, Indonesia and India. While she has plans to expand, she said, “I want to do everything in the right way. I’m a control freak but in the nicest sense of the word.”