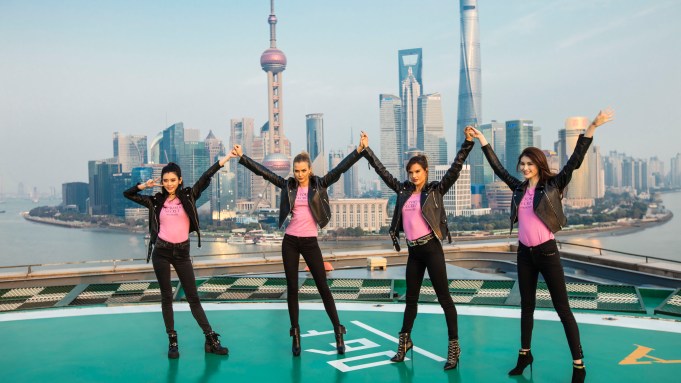 CHINA CALLING: Victoria’s Secret beauties Josephine Skriver, Sui He, Ming Xi and Alessandra Ambrosio are among the Angels kicking up a social media storm this week.

They are midway through their tour of China, first stopping in Shanghai before heading to the western city of Chengdu to open the lingerie brand’s first full-assortment stores in the country.

The brand unveiled its debut full-assortment store in Shanghai’s Lippo Plaza, where the Angels were doing meet-and-greets on Wednesday.

But they also had time to take in some of the city’s most famous landmarks, posing in front of the Oriental Pearl Tower, Yu Garden and even cruising down the Huangpu River. Fellow models Ming Xi and Sui He – both of whom are Chinese – helped show them around.

Victoria’s Secret first opened beauty- and accessories-only stores in mainland China in June 2015, and now have 26 such doors across mainland China, plus five in Hong Kong. However, they are ramping up their business in the region. Last fall, Victoria’s Secret debuted in Tmall. The company will open a large flagship store in Hong Kong in the latter half of this year, as well.

The lingerie giant is also hosting its annual glitzy fashion show at the end of the year in Shanghai. The perennial star-studded event took place in Paris last year with performances from The Weeknd and Lady Gaga.