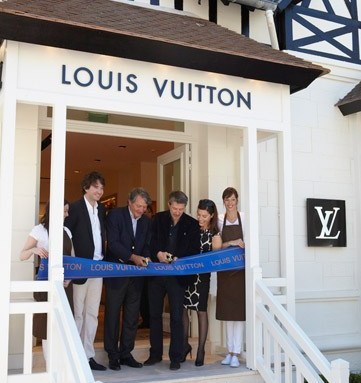 TUDOR’S DOWN: Louis Vuitton has given its mock Tudor store in the heart of Deauville, France, a makeover. Renamed the Villa Vuitton, the 960-square-foot boutique is typical of Normandy architecture and carries accessories and leather goods over two floors. It was feted over the weekend with a private tea attended by Vuitton’s Antoine Arnault and French actor Antoine de Caunes.

MASKED BALL: A month after the Metropolitan Museum of Art’s Costume Institute gala, the Temple of Dendur played host to yet another black-tie soiree that celebrated the cocktail of art-meets-fashion. On Tuesday night, Vacheron Constantin launched the final set of its Métiers d’Art Les Masques collection, which features reproductions of antique masks originating from Indonesia, China, Mexico and Gabon. After taking a tour of the new African and Oceanic art exhibit, sponsored by the watchmaker and spotlighting some of those original masks, guests including Lela Rose, Rachel Roy, Muffie Potter Aston, Olivia Chantecaille and Ren Grady, Pepe Fanjul, Celerie Kemble and Boykin Curry took in a dinner and tribal dance show by Julliard performers. The draw for the serious watch collectors on hand, however, were the watches themselves; this was the first — and only — time the whole three-set collection will be presented together. Others, Rose joked, came for the possibility of a Vacheron Constantin timepiece giveaway.

OLIVIER TWIST: Nina Ricci fans will have a chance to snap up designs by Belgian-born Olivier Theyskens, who showed his swan-song Ricci collection in March, as the French house clears out its closets on Friday in a major one-off sale in Paris. Spanning several past seasons, catwalk pieces will be up for grabs along with ready-to-wear outfits, but also shoes and accessories for as little as 40 euros, or $55 dollars at average exchange rates.

VENETIAN PLANS: Contemporary art aficionados gearing up for the opening of the 53rd Biennale in Venice on June 7 have a treat to look forward to this year: The Pinault Foundation will be unveiling perhaps the most anticipated renovation in Venice since the Fenice opera house and the Clock Tower in Piazza San Marco. The Punta della Dogana, the 17th-century building located at the tip of Dorsoduro that divides the Giudecca Canal from the Grand Canal across from St. Mark’s, will open its doors on June 6. After two years of restorations, the Punta della Dogana will host an exhibition in tandem with Palazzo Grassi, owned by the Pinaults, and curated by Alison Gingeras and Francesco Bonami called “Mapping the Studio: Artists from the François Pinault Collection.”

Meanwhile, Vogue L’Uomo will throw a DJ party on June 5 at Palazzo Grassi. The soiree will be sponsored by Gucci Group and is the second time the magazine will celebrate its second Arts Issue at the Biennale. The May-June edition is titled “A Unique Journey into the Artists’ Studios,” and features Richard Prince and Cindy Sherman on double covers, and inside features nearly all the artists showing at the Biennale and around Venice.

GIANTS FANS: Lord & Taylor is thinking men. Just in time for Father’s Day, the department store will bring a couple of local football stars to its New York City flagship to create excitement on its men’s floor. First up, New York Giants defensive end Osi Umenyiora will make an appearance tonight on behalf of Nautica. Anyone who purchases $50 worth of Nautica merchandise will receive a complimentary signed photo of the player. Then on June 11, L&T will host Giants coach Tom Coughlin, who will sign copies of his recently released book, “A Team to Believe In,” an insider’s account of the team’s ascent to the top of the heap with a Super Bowl win two seasons ago. The autographed book will be given to any customer who purchases $150 of Joseph Abboud merchandise.

FOOT FETISH: Galeries Lafayette is set to become a destination for shoe addicts next month with the opening of a dedicated footwear zone that the venerable Parisian department store claims will be the largest in the world. With a commercial space of 34,500 square feet, which almost doubles Lafayette’s current shoe department in the Boulevard Haussmann store, the dedicated floor will carry 150 brands, half of which will be exclusive. Catering to the requirements of the numerous foreign visitors of the store, notably from China and Russia, footwear sizes will span from 34 to 43, with prices running from 100 to 1,300 euros, or $148 to $1,925. A pedicure salon and a cobbler will complement the shoe department, which will open in the basement of the Haussmann store.