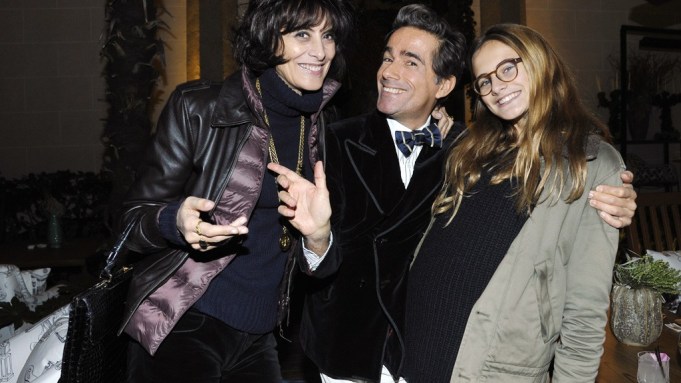 MIDNIGHT IN PARIS: Vincent Darré has applied his whimsical touch to the Prince de Galles, the Art Deco splendor that reopened this year after a major renovation. Darré’s friends, including Inès de la Fressange, Kenzo Takada and Gilles Bensimon, turned out on Monday night to see the hotel’s patio, which he decorated as a winter garden with sofas covered in Pierre Frey fabrics.

Darré said he considered the Twenties a golden age. “It was a bit like the Palace era, which I lived,” he said, referring to the Paris nightclub scene of the Seventies and Eighties. “There was no power at stake, just friendship.”

De la Fressange, sporting a Uniqlo down jacket, was in deep conversation with executive chef Stéphanie Le Quellec, a “Top Chef” winner who presides over the hotel’s restaurant La Scène. “I love eating, but I have no interest in cooking,” confessed de la Fressange.

Cecilia Bönström, the Swedish-born creative director of Zadig & Voltaire, said she did a little bit of decoration of her own at home before coming: She installed three Christmas trees. “Advent is a very important tradition in Sweden. We light up a candle every Sunday,” said the mother of three boys. She had just returned from New York, where she worked on the brand’s next campaign, featuring Freja Beha Erichsen and shot by Terry Richardson.