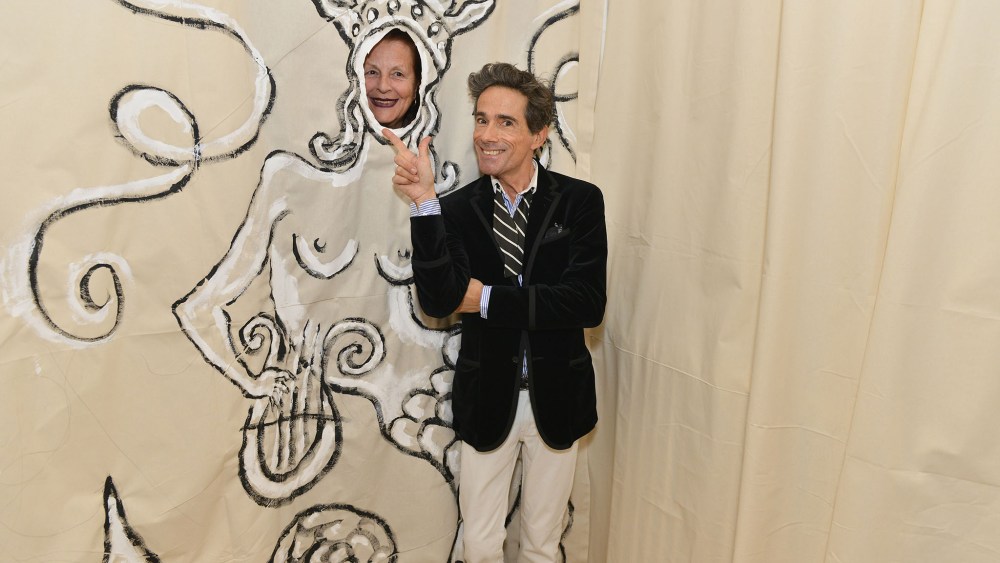 FRIENDS: Guests attending a housewarming party for designer Vincent Darré’s new apartment showroom in Paris on Friday night, located at 13 Rue Royale, were surprised to see that the place was still empty.

“It’s tradition in France, it’s a real housewarming, the place is still being decorated,” laughed Darré as workers in dungarees milled about serving Champagne. Vanessa Seward and Courrèges designers Sébastien Meyer and Arnaud Vaillant posed for pictures in the first room hung with sheets daubed with illustrations of King and Queen Royale, their faces cut out for guests to poke their own through, while in the lobby, a live Senegalese band banged out tunes.

“It’s cool, he’s made it his own,” said Seward, who revealed her husband, Bertrand Burgalat, is planning the release of an album based on soundtracks he has created for her show. “I think my favorite would have to be the first one, performed by April March, called ‘Vanessa’s Way.'”

Darré said he’ll install his new collection, Renaissance, in April, mixed with vintage furniture; contemporary artworks, and customized pieces by a range of designers including Eric Schmitt, Mathias Kiss and Mattia Bonetti. “It’s a return to what the arts décoratifs used to be. I had to fight with the owners to paint the ceiling orange in here, in homage to Henri Samuel, a major interior designer from the Seventies,” said the designer, giving a tour of the high-ceiling living room with Inès de La Fressange, Camille Bidault Waddington and Victoire de Castellane following him.

“It feels very authentic and real, but then again, there’s not a lot you need to do to such a beautiful space,” said Esteban Cortazar, who is planning a big event with Colette for July to mark France-Colombia year. “We’re going to re-create a Colombian market. I’ll basically be bringing some Latin flair into the store, and we’ll also be serving Colombian food and drinks in the restaurant.”

As the party atmosphere cranked up, Arielle Dombasle added to the excitement by filming a scene for her new film, “Alien Crystal Palace,” starring Thaddaeus Ropac, Ali Mahdavi and Christian Louboutin, who sat on a row of chairs with mysterious boxes on their laps, with a row of hooded and gold-masked men standing behind them. Having wrapped the scene, Dombasle shared her appreciation of Darré’s new space, saying: “He is always on the edge of invention.”