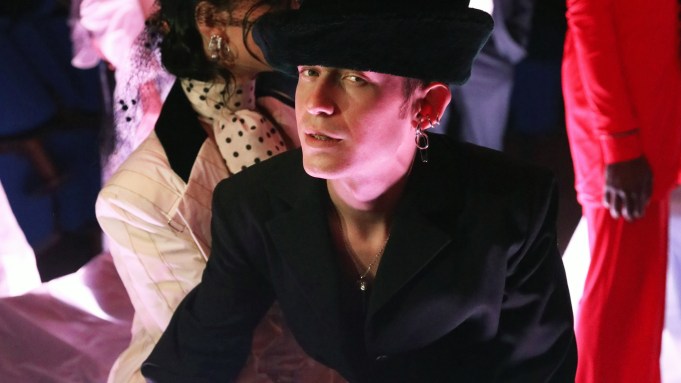 THE WORLD IS A STAGE: “I can’t help it, I have to create,” said Vincent Garnier Pressiat after his first show at the Théâtre Daunou, where he’d flipped the tables on his audience. Four seats onstage awaited the guests, which included Michèle Lamy, while the spectator seating area was taken up by a dozen or so models.

During France’s first lockdown, this Maison Margiela and Balmain alum who trained at the École de la Chambre Syndicale found himself between jobs. He started to create distorted collage portraits of people who inspired him, posting them on social media. That’s where Lamy found him.

“One day, I saw this portrait of me on Instagram. It was a very Klimt-like collage by someone called Nikkria,” she said. “When a magazine asked me which photographer I would like to take my picture for an editorial, I asked for this artist. That’s when I found out it was actually Vincent, whom I knew from Manko Club,” the Parisian cabaret that closed in 2019.

But one creative output wasn’t quite enough to appease Pressiat’s creative urges. “So I thought I’d launch a brand,” he said.

Inspired by the parallels between the Prohibition era and today’s sanitary crisis-related restrictions, Pressiat offered a dramatic lineup that toed the line between costume and couture, depending on whether the setting was this Art Deco theater originally decorated by Jeanne Lanvin, or a Paris street on a weekday.

A Poiret-like cocoon coat, femme fatale gowns with dramatic corset lacing all the way down the back, Amelia Earhart aviator jacket and cap and Zoot suits cinched to size. Prints of his swirling artwork, a visual interpretation of the mind-altering effects of opium, adorned hemlines or climbed up fire red trousers.

Interesting handcraft, like an upcycled chiffon lookalike made of layered and frayed hosiery, or suiting made out of grosgrain ribbons assembled together, offered a tantalizing glimpse at Pressiat’s ideas and his apt hand at executing them. Worn by a gender-fluid cast, the label tapped into today’s tropes while avoiding pastiche.

“I wanted to show that everyone has a spark within themselves. But you can only see it in the shadows of a society that is suffocating us,” he said.