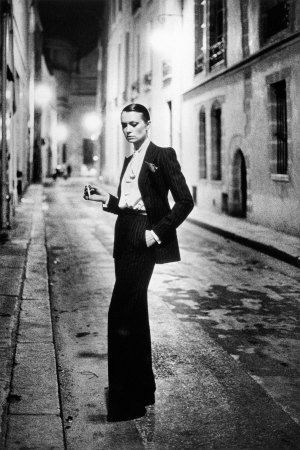 REDISCOVERING NEWTON: ONGallery, the new London-based online gallery, has launched Vintage Newton, a three-day pop-up exhibition — online and in a gallery — featuring a rare selection of photographer Helmut Newton’s original vintage prints from the Seventies and Eighties that capture his provocative aesthetic.

The 26 silver gelatin prints were produced in limited quantities by Newton himself, from a series of transparencies. The selection represents the images chosen by the photographer as his strongest work. The show runs through Nov. 28.

The prints had originally formed the foundation of the famed Private Property series of exhibitions, which took place in 1984 and 1985. They were then gifted to the photography agent Norman Solomon.

“Over the years, the Private Property portfolio has achieved legendary status, and represents an extraordinary photographer at the height of his creativity,” said Lance Leman, ONGallery’s head of artists’ publishing.

Leman pointed to the image of the jeweler Elsa Peretti dressed in a Halston bunny costume as the exhibition’s standout photograph. “In this photo shoot for American Vogue in 1975, Newton captures Peretti’s stylish sexuality against a backdrop of the Manhattan skyline. I also love the political incorrectness of her smoking a cigarette,” he said.

Other highlights include a black-and-white portrait of Charlotte Rampling; a 1977 one that shows a model’s fitting with the designer Jean Patou; and a candid shot of Jerry Hall. The widely recognized Rue Aubriot image, shot in Paris and featuring a model wearing Yves Saint Laurent’s Le Smoking, is also part of the show.

The prints are available to view, and to buy, via the gallery’s Web site and at The Showroom Presents in Fulham, London, the temporary space used by ONGallery for the three-day pop-up.