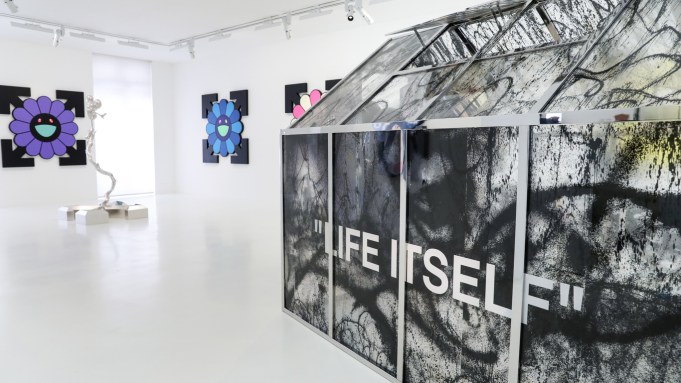 SEEING IN TECHNICOLOR: Don’t let staging his first men’s show for Louis Vuitton on Thursday, the day after presenting the latest collection under his own line, Off-White, slow Virgil Abloh down. The designer was on fine form at the inauguration of his show, “Murakami & Abloh, Technicolor 2,” at the Gagosian gallery in Paris on Friday night.

Asked how he was feeling having created such a happy moment at Vuitton, with his Technicolor runway, he replied: “A bit of humanity in our industry can always go a long way.”

He reiterated that it felt like his first real show. “There’s only a few moments in a fashion designer’s career where this opportunity for a perfect storm, where the right platform, the right attention, the right time in our society to do something like that comes along. I have the feeling my intention came through,” he said.

He described the basis of the exhibition as “basically a conversation that Takashi Murakami and I have daily and we produce work out of that conversation. We make paintings, digital works, sculptures, that report our time. We’re both from different fields: I’m multidisciplinary, he practices his art and so where we meet in the middle are these contemporary icons of current culture.”

On the subject of Murakami saying his multicolored runway for the Vuitton show was inspired by one of his works, he replied: “Yeah, our whole thing is Technicolor….I work on multiple things at one time. Mine was focused on ‘The Wizard of Oz’ and Pink Floyd, the spectrum, the prism….Everything relates to everything.”

When asked if the show would travel, Abloh said, “We call them collections of art. We make art, then they’re on display, then they sell or stay in rotation, it’s kind of like an ongoing process.”

The designer said he collects contemporary artists that he “resonates with” but declined to share names.

“The body of work and things I’m collecting, I’ll probably put on display someday….It’s the same narrative that I pull in fashion: a young generation in the context of the established; I buy across a range,” said Abloh.

“Lots of super speedy conversations on WhatsApp,” said Murakami, who has a solo show coming up this fall at the Gagosian Gallery in Hong Kong and is readying to open his first store selling sneakers and apparel in Tokyo in September.

Kid Cudi was checking out the work “Life Itself,” a small plastic house splattered with black urethane paint with a giant black plastic flower guarding the door.

“It’s amazing, it’s beautiful. I like when Takashi does big pieces, there’s something about the black and the flower character. Takashi and Virgil are just the most amazing creators, they do groundbreaking s–t all the time,” he said.

Yasiin Bey, aka Mos Def, talked about the gallery he’s preparing to open with Set Free Richardson in the Bronx, the birthplace of hip-hop, this fall, dubbed Compound.

Kanye West’s personal barber, Ibn Jasper, was also in the crowd, sporting prototype sneakers designed by his truly due to launch in September, under the Stratica International banner.

When asked how he deals with West’s mood swings when shaving the rapper, Jasper shrugged: “When working in a barber’s shop, you get used to volatility so when it comes to dealing with what Kanye talks about, that’s easy.”