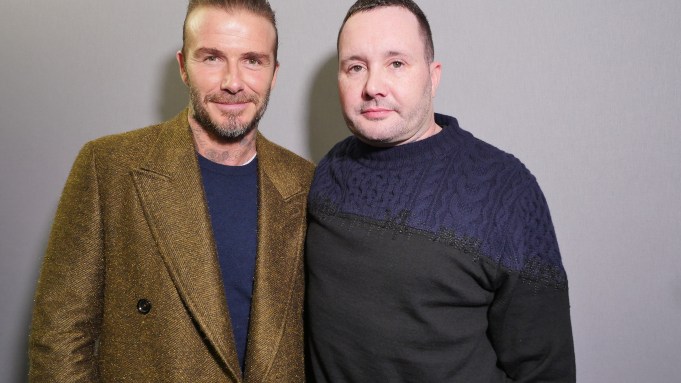 “What an amazing tenure, he has always been one of my favorite designers and his gift to the world of men’s fashion will be forever remembered. Super excited to see what he goes on to do,” he said.

“Excited to see what he’ll be doing next,” echoed Beckham, who took in the show with her husband and son, David and Brooklyn Beckham, eyeing up one of the leather jackets with cherry blossom embroidery.

“It’s been an amazing journey for him and, of course, it’s not over yet. He’s just at the beginning of his career,” said Stephen Jones.

Blending with the set, Ambush’s Yoon Ahn, who is a close friend of Jones’, wore a dress in the same print that was used to cover the runway, based on an aerial view of Kenya. “Departures are not necessarily a sad thing, he’s done such an amazing job for Vuitton, he has contributed to the history of fashion,” said the designer who teased she has a “huge” collaboration due out with a sports brand later this year.

Studying the show set, with the print and the venue’s circular gray seating podium, Italian actor Luca Calvani, who was sitting next to Christie, joked: “It feels a bit like a dragon pit, that’s why I’m excited I’m sitting next to Brienne of Tarth.”

“It’s intriguing, there’s something very fundamental about circles,” agreed the actress, who is currently filming the final season of “Game of Thrones.” She also saluted Jones.

“What he has done at Vuitton is really exceptional, he has rebooted luxury in terms of making it commercial, viable and contemporary. And most importantly artistic,” she said. “He has never compromised his artistic vision for the sake of commodity.”