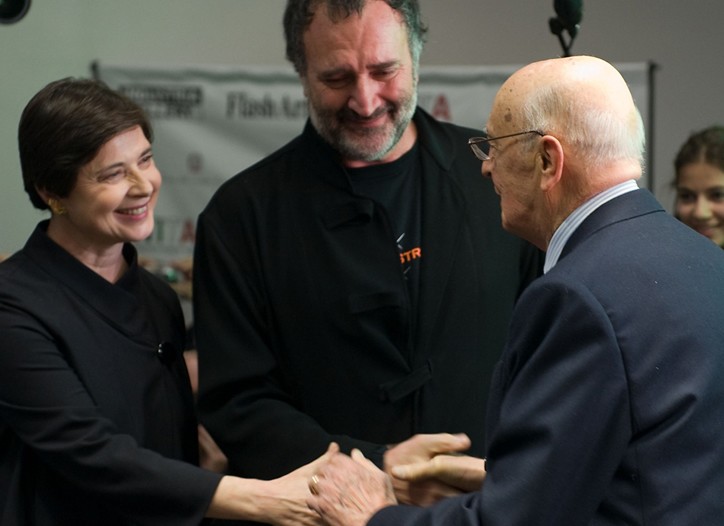 VIVA ITALIA: Industria always has something going on. But Sunday’s megaevent, celebrating the sprawling studio’s 20th birthday, its new gallery for Italian artists, and 150th anniversary of the unification of Italy was almost too much for the founder himself, Fabrizio Ferri, who upon introducing the President of the Italian Republic, Giorgio Napolitano, got choked up in the middle of his speech, overwhelmed by the moment. As he cupped his face in his hands, the crowd of 500 applauded in support. “It’s very emotional, very emotional. Grazie. Grazie,” Ferri said, upon leaving the stage with Isabella Rossellini and the president’s entourage. Asked how he’s moving Industria forward, Ferri responded, “We’re leading the transfer from still to moving stills.” Security was tight for President Napolitano, with police blocking off the West Village streets and delaying the long line of executives from Giorgio Armani, Benetton and Vhernier, as well as dignitaries from the Italian Trade Commission and Italian artists from entering the party. Brooks Brothers chairman Claudio Del Vecchio took it in stride and was pleased to later chat for a few minutes with the president. “He’s amazing. I hope I’m as good as he is when I’m 85.”

DENOUEMENT: Cacharel said Monday that Belgian designer Cédric Charlier’s contract would not be renewed once it ends on Oct. 7. The French house best known for its colorful prints signed Charlier on in April 2009, and his design relaunched the brand’s women’s ready-to-wear line in October of that year. Earlier, Charlier spent six years as Alber Elbaz’s assistant at Lanvin.

MALE CALL: Coach celebrated its big push into men’s last week with a party to showcase its fall-winter collection at the trendy Ace Hotel. The accessories firm set up vignettes around the room featuring everything from briefcases and weekender duffles to totes and a capsule collection of leather jackets. The most interesting ensemble was a bicycle-inspired collection that featured all things related to cycling, including leather-covered chains, headphones, panniers and backpacks. Overall, the flavor of the men’s collection was based on archival pieces, reworked to fit today’s modern sensibility. Even the men’s logo was reworked to replicate the company’s original branding.

In a move to drive home a quality and craftsmanship message, Coach set up a pseudo-sample room at the event, complete with three craftsmen, rolls of different leather skins, sewing and embossing machines to create personal wallets for guests at the event.

QUEEN OF BLING: Milla Jovovich celebrated her new role as the face of Jacob & Co. with a cocktail at the Baselworld watch and jewelry fair, and founder Jacob “King of Bling” Arabov made sure she was dripping in diamonds. “Well, it’s not much,” she deadpanned. “This ring is $20 million. This bracelet is probably $10 million. Necklace is about, I don’t know, 6.5. The earrings are 10. No big deal.”

Jovovich said the six security guards assigned to protect her had even tried to bar her husband, director Paul W.S. Anderson, from the room. The pair, who has worked together on four “Resident Evil” movies, is about to make a 180-degree turn with the October release of “The Three Musketeers,” directed by Anderson and starring Jovovich as Milady de Winter. And the model-turned-actress has already thought of a tie-in. “The whole point of the story is stealing the queen’s diamonds, and who else would be better to put diamonds on a queen than Jacob?” she said with a smile.

NEW VINTAGE: Brit singer Lily Allen and her sister, Sarah Owen, made their retail debut last year, when the duo launched their Lucy in Disguise vintage store in London’s Covent Garden. Now the sisters are expanding into ready-to-wear with an 18-piece collection of vintage-inspired designs for pre-fall. The collection, Allen said during a preview Tuesday, is inspired by the idea of the fictional Lucy, “a time-traveling fashionista who’s inviting you to explore her wardrobe.…It’s a great opportunity to play with the character,” she said.

The collection revolves around dresses, including Fortnums, a Forties-style rayon crepe tea dress with a lily of the valley print that the sisters commissioned; Chatsworth, a lawn green high-waisted maxidress embroidered with matte gold sequins, and Capone, a black sequined and beaded tulle flapper-esque dress. Retail prices will range from $175 to $630. The collection will launch exclusively in the U.K. at Harvey Nichols, and at Shopbop.com in the U.S., Le Bon Marché in France, Freeshop in Japan and David Jones in Australia. The collection will also be sold at the Lucy in Disguise London store and via lucyindisguiselondon.com from June.