Brigitte Stepputtis, head of couture at Vivienne Westwood, presented the range during an event at the Nyetimber vineyard. 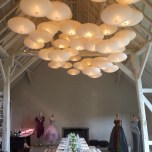 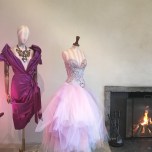 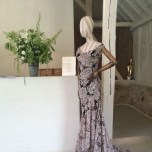 SHOWING IN SUSSEX: British label Vivienne Westwood showcased its bridal and couture collections on Friday during a small event held at the Nyetimber Champagne estate in West Sussex, England.

Brigitte Stepputtis, head of couture at Vivienne Westwood, presented the collections during an event at the Nyetimber vineyard, which included a tour of the grounds, a wine tasting and a vegetarian lunch in keeping with the designer’s ethos.

The White Barn on the Nyetimber estate provided a dramatic backdrop for 10 mannequins dressed in the designs. The sprawling estate spans 483 acres, including barns and vineyards that produce chardonnay, pinot noir and pinot meunier.

Stepputtis said her lineup was inspired by Greek — and Hollywood — goddesses as well as high-society women. There were also influences from 17th- and 18th-century salon culture, which originally encouraged Westwood to learn corsetry.

Stepputtis said the label is not creating a full red carpet collection, but a relatively small range. “Business is going well,” she said. “Especially with the bridal because it has become more fashion. Before, it was a very conservative thing. But now brides are more playful.”

“Westwood’s clients always come because they always want something special,” she added. “They have in mind what they want. She’s quite an independent woman. She thinks for herself and wants something special. We might have a client who comes in — of which we have had several — and say, ‘I own a castle and I want to throw a party and I want to wear a golden dress as a theme.’ Then we work with the client.”

The capsule collection consisted of evening gowns and cocktail dresses and the head of couture said the styles were based on classic Westwood shapes such as the ruched Amber style and Dione draping. A lot of the dresses, she said, are used for red carpet and celebrity dressing.

The Ava, which took its cue from a Grecian goddess, featured metallic gunmetal gray lamé fabric twisted and wrapped on the body. The Eden dress paid homage to the Elizabethan era with full sleeves, a nipped waist and a flowing skirt.

The Antoinette dress included a hidden 17th century-style corset adorned with soft gold sequins onto a floral appliqué lace. It was made so that the skirt of the gown could be lifted and draped to create a minidress.

Sequins, a new embellishment this season, were festooned on a gilded floor-sweeping strapless style. Meanwhile, an unnamed style which Stepputtis said “was literally finished yesterday” featured a strapless corset with a silk bodice and full skirt in multicolored stripes.

For bridal, new styles included the Harry dress, done in an ivory crepe accented with floral embroideries. The Lace Amber gown came in a rich gray silk with an overlay of ivory lace.

The label produces bridal and eveningwear couture seasonally. It is made in the Davies Street London couture and bridal boutique, and will also be made in the brand’s New York boutique, which is set to open this fall.