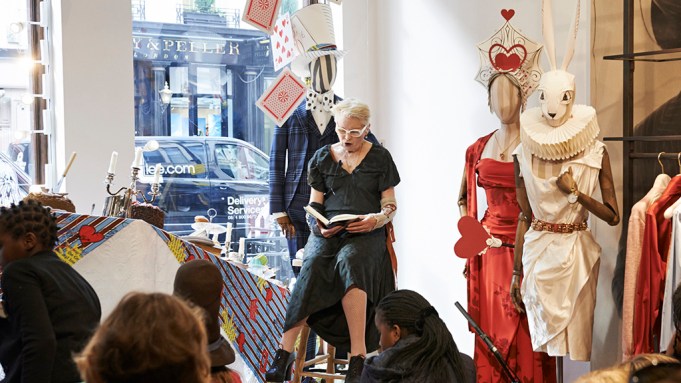 WESTWOOD’S WONDERLAND: Vivienne Westwood has teamed with Vintage Classics on a special gift edition of Lewis Carroll’s “Alice in Wonderland” to mark the tale’s 150th anniversary.

Westwood has created a cover that features her harlequin print and an image of Alice. She has also written the introduction to the book and added several pages about her views on capitalism, the environment, sustainable energy and activism to the new edition.

“Kids! Never become complacent,” Westwood wrote in her introduction. “The world we think we know reflects the way we are conditioned to see it. Maybe it’s not like that at all. Carroll is on your side. Always wonder. ‘Alice in Wonderland’ is timeless, but with my cover and endpapers, by adding the ‘climate map’ and the text, ‘end capitalism,’ I have helped fix it in the present moment.”

Carroll’s classic inspired Westwood’s fall-winter 2012 collection and she considers the tale one of her childhood favorites.

“It’s just such genius!” the designer told WWD during a Mad Hatter’s Tea party at her Conduit Street store in London. “It’s so brilliant. It is really subversive of official opinion and official attitudes to children. Our world is the world we make it.”

Westwood also read excerpts from the story to 20 children from various charities, including Shelter, Rays of Sunshine and Kids Company. The store’s decor took its cue from the book with red playing cards suspended from the ceiling and Alice-inspired sandwiches, biscuits, cakes and herbal teas.

Published by Vintage Classics and illustrated by John Tenniel, the 348-page hardback is priced at 15 pounds, or $22 at current exchange, and can be purchased from the Vivienne Westwood store and online.