The designer and Andreas Kronthaler have created wrap jackets. 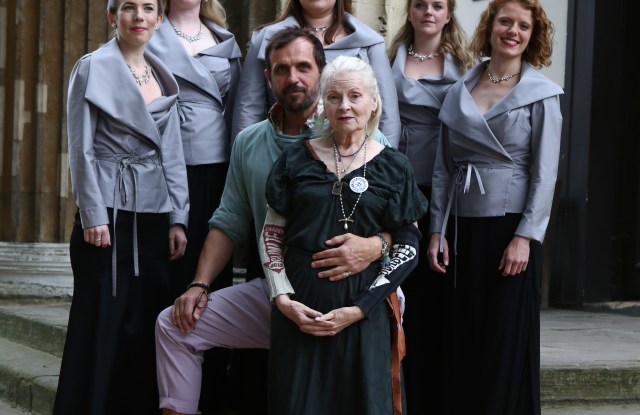 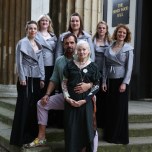 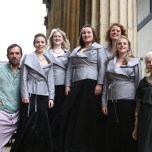 ANOTHER VOICE: Dame Vivienne Westwood is hearing the music — but it’s classical rather than punk.

Westwood and Andreas Kronthaler, her husband and design partner, have created the women’s jackets for Britain’s Monteverdi Choir and Orchestras.

The asymmetric wrap design was developed by the Westwood couture team and tailored specifically for each performer, the company said. Created in a gray silk-cotton mix, it was developed for “comfort and elegance” during performances.

The Monteverdi Choir was founded in Cambridge in 1964, and is considered to be one of the best in the world. Made up of men and women, its upcoming major project will be a tour next year to celebrate the 450th anniversary of its namesake composer, Claudio Monteverdi.

“Since we first heard them perform, we have made a point of going to concerts by the Monteverdi Choir and Orchestras,” said Westwood. “For us, their music-making is different, the sound is brighter and clearer, the music lifts you. It’s bliss to hear them, a tremendous experience. We have been talking for a while about making outfits for the choir, so we’re really happy it’s finally worked out.”

Westwood and Kronthaler first got to know the choir in 2014 during an event at Buckingham Palace hosted by Prince Charles, who is Monteverdi’s royal patron.

Sir John Eliot Gardiner, artistic director and conductor of the Monteverdi Choir, said the jacket design was important as there is an element of ritual to each concert performance.

“Dress and presentation have always been very important to us. It is important that the choir’s uniform is not only striking, but practical: It needs to be able to withstand long journeys in crammed suitcases and to look smart in venues which at times can be either freezing cold or uncomfortably hot,” he said.

Gardiner added the new jackets are “eminently sensitive to the singers’ practical needs.”

Westwood is no stranger to designing uniforms and dressing establishment figures: The Virgin Atlantic ground staff and crew have been wearing her designs since 2014, while the designer has also dressed opera stars and worked with the English National Ballet and for the KunstFestSpiele arts festival in both Hanover and Sydney.

Vivienne Westwood is also one of British Prime Minister Theresa May’s favorite labels, although the left-wing activist designer in no way supports the Conservative politician. Earlier this week, Westwood told BBC’s “Today” program: “Do I mind if Theresa May wears my clothes? No, but I certainly don’t admire her for anything. I think she’s awful.”