Vivienne Westwood has teamed with the posh British firm Cole & Son for a wallpaper collection. 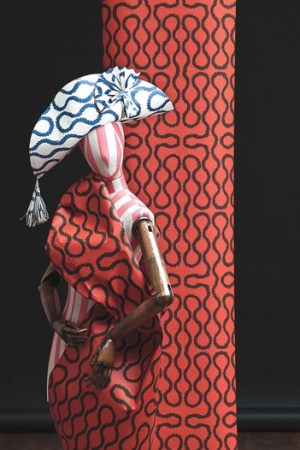 WESTWOOD HITS THE WALL: Vivienne Westwood might well be one of fashion’s most antiestablishment figures, but that hasn’t stopped her from teaming with the posh British firm Cole & Son for a collection of wallpaper. The range, based on designs from past ready-to-wear collections, launched this month under the label Vivienne Westwood for Cole & Son. The wallpaper designs include Squiggle, which was taken from Westwood’s autumn 1981 Pirate collection, and Cut Out Lace, based on a fragment of antique lace taken from the spring 2007 I Am Expensiv collection. Prices range from 55 pounds, or $87, for a standard roll to 188 pounds, or $298, for a trompe l’oeil design that looks like a ruched tartan fabric. The collection will be available through Cole & Son’s U.S. stockists later this year. “This collection is a perfect opportunity to be able to work with a heritage company and to see my ideas from fashion translated into the world of interiors and wallpaper,” Westwood said.

EVA’S COOKING: Las Vegas got a taste of Latin flavor in mid-December when Eva Longoria Parker came to town for the opening of her restaurant Beso at the Crystals in the CityCenter development, teaming with celebrity chef Todd English for the second time.

“I love to cook, so I was very involved in all aspects of the menu,” she said, adding that she and NBA-star husband Tony Parker visit Vegas regularly. “Las Vegas really has become a wonderful destination for food and dining.”

The actress — who was the last tenant to sign on to the Crystals before the project’s debut but the first to open — celebrated the launch in Vegas style, partying with MGM Mirage executives and fellow Crystals tenants into the evening on Wednesday. Despite her clear loyalty to her kitchens, Longoria Parker fessed up to having stepped out to try other things, too. “One of my other favorite restaurants here is Yellowtail,” Longoria said.

Longoria wasn’t the only recognizable face on hand — Priscilla Presley turned out for the opening, as did designer Monique Lhuillier, along with former “Lifestyles of the Rich and Famous” host Robin Leach, Cirque du Soleil founder Guy Laliberte and casino magnate George Maloof.

BED AND ROSES: Hermès shoppers in Paris will soon have a top gourmet spot right next door. A new Bread and Roses shop is slated to open in January in the Hermès building, next to the John Lobb store, on Rue Boissy d’Anglas. Known for its organic breads, fine English cheeses and French pastries, Bread and Roses’ first gourmet store opened on the Rue Madame five years ago. The new 2,000-square-foot branch will feature high-end products like Cinco Jotas ham from Sanchez Romero Carvajal, French caviar and Scottish salmon to savor on the spot or to take away. “The authenticity of our products meet the same philosophy as Hermès craft fashion goods,” said Philippe Tailleur, Bread and Roses’ owner. Tailleur plans to open a third store in Paris next year and has plans for a hotel opening as well.

BOTTOMS UP: Fashion addicts can swill some Bollywood bubbly this holiday season. That’s because Pommery invited Indian fashion designer Manish Arora to dress its Brut Royal Champagne bottle. Known for his colorful and kitschy creations, Arora designed a multicolor sheath with gold heart motifs for the French Champagne maker. The limited edition run of 1,500 bottles is available in-store until Valentine’s Day. Over the years, Pommery has collaborated with several fashion designers, including Givenchy, Christian Dior and Inès de la Fressange.