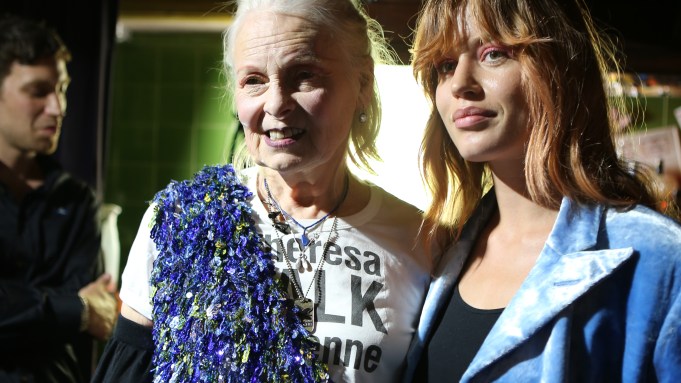 HOT CLIMATE: Vivienne Westwood rapidly switched her attention from fashion back to climate change on Tuesday night, speaking at a student-focused event in London sponsored by Climate Revolution, Westwood’s web site and non-governmental organization that aims to raise awareness around climate change.

“If you go to art galleries, if you read books, you are not consuming, you are contributing to culture, ideas. What I say is anybody who engages in art and culture is a freedom fighter,” Westwood told the crowd at her Intellectuals Unite (IoU) party in collaboration with Project 0 at Soho Club The Box.

James Jagger and Mike Walker of Project 0 also spoke at the event, which urged students to take a stand on green issues.

Westwood and her friend Cynthia King started Climate Revolution six years ago in an effort to educate the public about climate change. “My job as an activist is to try to clarify the situation, get it all in one go, because you never, ever get the complete picture,” Westwood said. “We really need to analyze the situation, I’m good at that and that’s why I’m a good fashion designer.”

Some students queued for hours to get in, and they filled the exclusive cabaret nightclub to the brim. Non-student guests included Westwood’s husband and design collaborator Andreas Kronthaler, and Rolling Stones offspring Georgia May Jagger, Tyrone Wood, Leah Wood and Alexandra Richards.

Jagger talked about saving the oceans for Project 0, a charity where he serves on the board of directors. “Reducing your carbon footprint is easy, you all know how to do it. It’s taking a walk, riding a bike, turning your lights down, shopping locally, it really is that simple.”

After the speeches, attendees danced to live music acts from Mic Righteous, Ray Noir and Raindog, although the crowd thinned out once the free bar closed at 10 p.m.

Georgia May Jagger watched her brother speak from the VIP section of the bar. “I’m so proud of my brother and of everyone,” she said. “And it’s really easy to organize a party for a good cause, rather than for no reason.”

In May, Jagger was named global brand ambassador for the sustainability-minded, California-based clothing company Volcom.

“They have a new technology where they use 78 percent recycled nylon, which can then be recycled. I think there are little things in fashion like that. They [can] make a big difference to the world.”

Going forward, IoU will host a recurring student night with Vivienne Westwood and Project 0 to encourage discussion around climate change.