Westwood joined her son, Agent Provocateur founder Joe Corré, at a ritual burning of punk memorabilia in defiance of celebrations to mark the 40th anniversary of the movement. 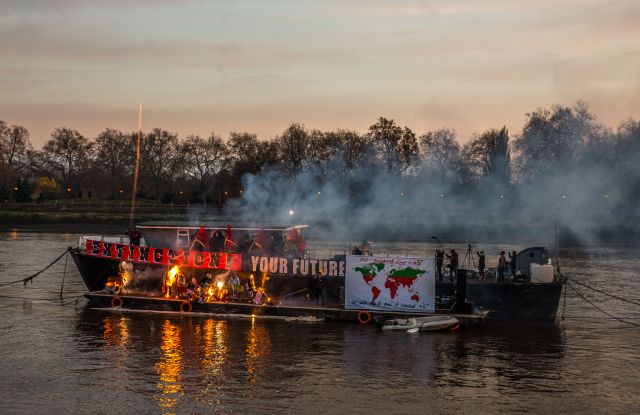 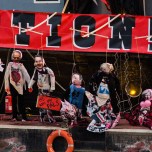 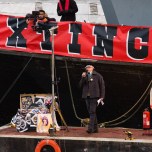 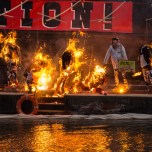 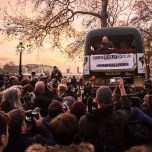 BURNED UP: Vivienne Westwood joined her son, Agent Provocateur founder Joe Corré, at a ritual burning of punk memorabilia in defiance of celebrations to mark the 40th anniversary of the movement.

Corré, whose father was Malcolm McLaren, the manager of the Sex Pistols and the driving force behind punk along with Westwood, organized a rally in Chelsea on Saturday in reaction to events around Punk London, which is marking the milestone.

Among the five million pounds, or $7 million, worth of punk mementos that Corré burned was the original copy of the Sex Pistols’ “Anarchy in the U.K.,” which was released Nov. 26, 1976.

The rally — which was live-streamed — took place at near the Albert Bridge in Chelsea, and saw a crowd of 200 supporters and press gathered on the riverbank to watch Corré set fire to his belongings from an ex-Navy minesweeper ship on the Thames. The site was not far from Sex, the punk boutique that McClaren and Westwood ran in the Seventies.

The boat, which was docked near Cadogan Pier, was decorated with a sign “Extinction! Your Future” along with a couple of Grim Reaper-like skeleton figures and a climate change map. Corre set fire to clothes, records, posters and other items which had been laid inside a chest, along with figures of politicians such as Prime Minister Teresa May and former PM David Cameron. Onlookers watched as the items were burned, and a small display of fireworks went off.

“Punk was never, never meant to be nostalgic,” Corré said. “Punk has become another marketing tool to sell you something you don’t need. The illusion of an alternative choice. Conformity in another uniform.”

Following her son’s protest, Westwood spoke to the crowd from the top deck of a green bus about climate change, and encouraged people to switch to green energy. She spoke against banks, corporate conglomerates and politicians and referred to the financial system as “rotten.”

She argued that the financial system is designed to create poverty and that it’s run on debt, fossil fuel and cheap labor.

“My job as an activist is to try to make things clear, so we can understand things and find the solution,” Westwood said. “I never knew what to say before. Ever since punk — we never had a strategy then — that’s why we never got anywhere. There is one way out of this — a green economy. What is good for the planet is good for the economy and the people. This is the solution.

“The green economy is about community, culture and fair share of the world’s wealth,” she added. “It will reward knowledge, ideas and hard work. This is what we have to work toward. What is the easier solution? Switch to energy. Just change your electric bills. Stop paying the fossil fuel industry and start paying the green fuel industry. It’s the same price. I use ecotricity. It’s our only hope. When half the country is on green energy, the government would be undermined and it wouldn’t be able to do what it now with fossil fuel. This is the first step towards a free world. This is so ridiculously easy. Let’s all have a laugh and stay alive.”

“What’s important is this country and these people don’t get serious about backing renewable energy instead of subsidizing fossil fuel,” Corré added. “Punk rock is a sideshow. It’s not going to help. It represented a moment in time when people could do something. It’s a pose.”

According to a spokeswoman from London’s Met Police, the crowd was orderly, no one was harmed, and there were no arrests made. Four firetrucks and a fire rescue boat were at the scene.