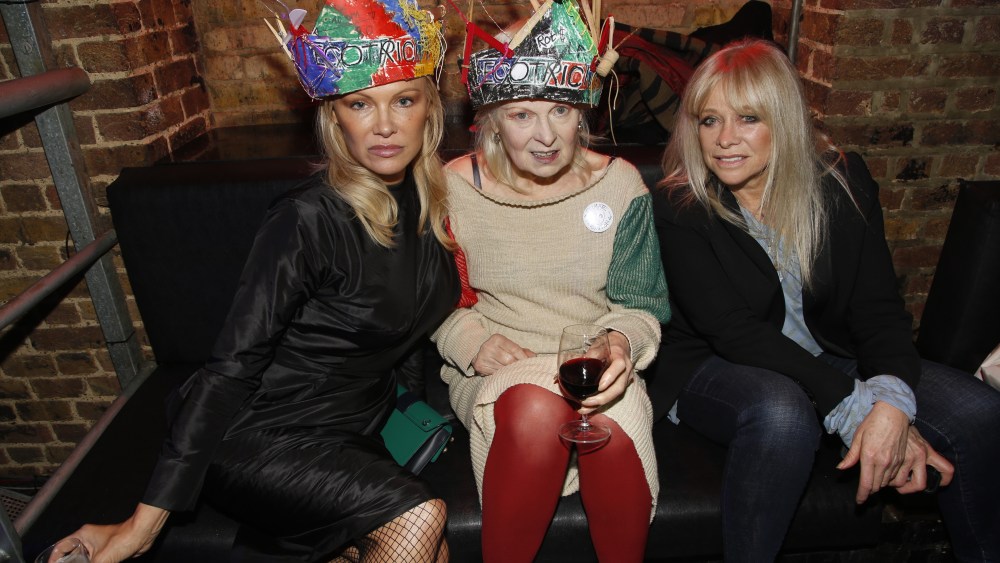 POWER TO THE PEOPLE: Fashion dame Vivienne Westwood turned up the heat on a “Mad Max”-inspired party she hosted on Monday night in London, with a fiery speech on climate change — after fashion, her second favorite topic.

“We have identified the problem, and the problem is the rotten financial system,” the designer said to a cheering crowd at the recently reopened Fabric nightclub in East London. “From the rotten financial system comes poverty and climate change. The solution is to get rid of that system and find a fair economy, and the first step to do so is to switch to green energy. Not only will it be good for the environment, compared to fossil fuels, which receive trillions in subsidies from governments worldwide, it will completely sabotage this rotten financial system, taking their power away and giving it to the people. It’s better than voting,” she challenged, sporting a self-made paper crown, adorned with plastic cutlery and tree branches, that read: Ecotricity, the name of the U.K.-based supplier of green energy Westwood has teamed with for her cause.

The plan is “to get half the country to switch in the next three years — that’s our target.”

Westwood’s organization Climate Revolution is also to work with Caroline Rush, the head of the British Fashion Council, to help the fashion industry get on the green track. The designer challenged her colleagues to work more closely with their suppliers in search of greener fabrics and dyeing methods that would help the industry to more sustainability.

The Brit was flanked by her activist BFF Pamela Anderson, who this year is to return to the big screen with “Baywatch,” opposite Zac Efron and Dwayne “The Rock” Johnson. Anderson said she was getting her power from solar panels on her roof. “In America, it is much more difficult to switch to a renewable energy source, but in the U.K. it’s one phone call — and it’s cheap. People just have to figure it out and ask the right questions, because it is not of benefit for the wealthy corporate companies to inform us about it,” she pleaded.

Other guests at the shindig included Gwendoline Christie, Charli XCX and Ellie Goulding.

Westwood also encouraged the crowd to visit her NGO’s web site, where she compiled a reading list for fellow eco warriors, before offering one last piece of advice: “Always dress up! That’s the best part of going out,” she preached. “People will like to talk to you and will like you to tell them to switch to green — if you look great.” Amen to that.