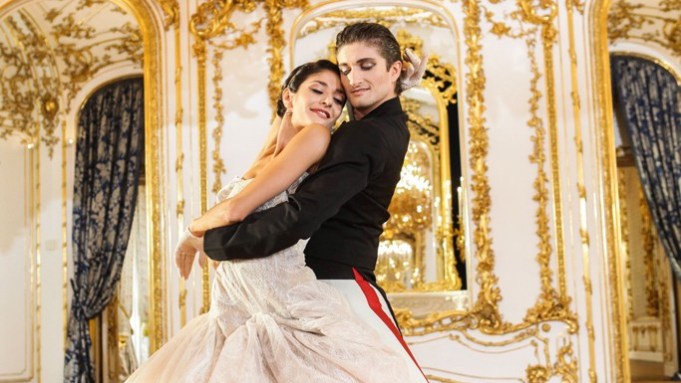 WESTWOOD AT THE BALLET: Vivienne Westwood is taking her dramatic designs to the stage. The perennially punkish designer has designed and curated costumes for the Vienna State Ballet, to be worn when the dancers perform during the intermission of the Vienna Philharmonic Orchestra’s New Year’s concert on Wednesday.

Not surprisingly, the looks worn by the dancers have been cherrypicked from the more romantic side of Westwood’s oeuvre. For the waltz that’s set to be performed live during the concert’s intermission, dancer Kathrin Menzinger will wear a customized version of the silk taffeta Moon dress that originally appeared in Westwood’s spring 2014 Gold Label show, while her partner, Vadim Garbuzov, will wear a black double-breasted jacket and black silk pants.

Meanwhile, a film of the ballet company performing in Vienna’s Palais Liechtenstein, which will also be shown during the intermission, will spotlight more of Westwood’s standout designs. They include a deep burgundy tulle bird of paradise gown, a buttercup yellow gown inspired by the looks in the designer’s spring 2005 collection and even Westwood’s tartan mini kilts and bustiers, with the latter worn by dancers performing the polka.

Austria native Andreas Kronthaler, creative director of Vivienne Westwood — and the designer’s husband — commented, “I feel honored that we were asked to design the costumes for the New Year’s Concert ballet, as it holds such tradition for me. I grew up watching [it] every year, and it’s become part of my Christmas memories.”